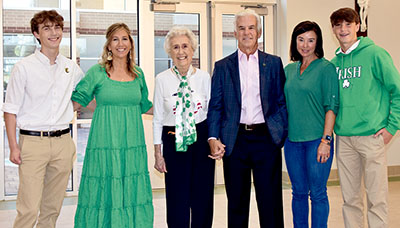 Knoxville Catholic High School kicked off its 90th anniversary last week by highlighting a family that now has its fourth generation attending the school.

Connor not only is the first of the family’s fourth generation to attend KCHS, but he also is the 29th family member to do so, said his aunt, Christy Connor Watkins (Class of 1989 and Helen’s youngest child), who, along with her son, KCHS senior Patton Watkins, also was on hand to mark the occasion.

The group gathered at the West Knox County school’s Fox Lonas campus in St. Gregory the Great Auditorium lobby — named Mike ’69 & Carroll ’72 Connor Lobby in honor of the family — for photos and to reminisce.

Helen, all smiles and still spry, noted she “attended the ‘old school’” along Magnolia Avenue, as did her late husband, Joe Connor.

Asian Culture Center of Tennessee is hosting two events at the end of the month to celebrate its culture.

Ninth Knox Asian Festival, free of charge, is from 10 a.m. to 6 p.m., Sunday, Aug. 28, at World’s Fair Park. Those wishing to may register online at https://www.knoxasianfestival.com for the chance to win one free ramen bowl from the Ramen Bones food truck, which is a Festival sponsor but will not be serving this year. Thirty registered participants will be selected at random for the free dish after the event, and will be notified via e-mail.

Specific films planned include the documentary “Far East Deep South,” which focuses on the 1882 Chinese Exclusion Act and its profound impact on generations. It is described by ACCTN executive director and Farragut resident Kumi Alderman as “an eye-opening film.”

The Taiwan documentary “Pakadavai” about Taiwan tribes features “Rashomon,” which was the first Japanese film to receive a significant international reception; “Memories of Murder,” a 2003 South Korean crime thriller co-written and directed by Bong Joon-ho; and “The Kingdom of Dreams and Madness,” a documentary of Studio Giburi.