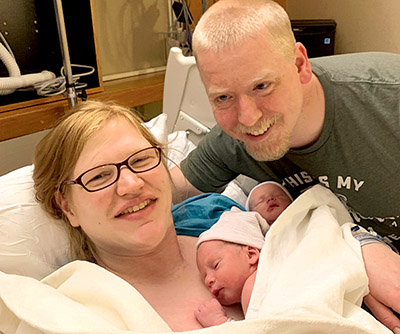 Two babies in the Pacific Northwest — whose births were facilitated by the National Embryo Donation Center in Farragut — have made history with their arrivals.

Siblings Lydia Ann and Timothy Ronald, children of Philip and Rachel Ridgeway, each spent nearly 30 years as embryos frozen in liquid nitrogen prior to being thawed earlier this year, according to an NEDC press release.

“When they were born Oct. 31, 2022, they set the new known record for the longest-frozen embryos to ever result in a successful live birth, according to research staff at the University of Tennessee Preston Medical Library,” the release stated.

The Ridgeways’ births of twins frozen for essentially three decades (29 years, 10 months) breaks the previous record set by another NEDC couple, Tina and Ben Gibson, of more than 27 years.

Help needed to save Christmas for family of nine 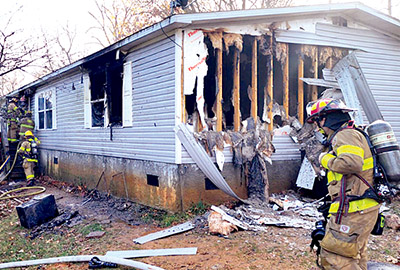 At first, authorities were alerted a child had been trapped, but by the time firefighters arrived the child had managed to escape.

“All were safe and accounted for when crews arrived,” stated a report from Rural Metro.

However, their home, located in the 11000 block of Woody Drive, was heavily damaged. They also lost three beloved cats in the fire.

“We lost everything,” said Brittany Baggs, Kelly’s oldest daughter and recent college graduate who was living with her family at the time of the fire.

According to a report from Rural Metro, firefighters responded at 9:20 a.m. and discovered flames showing through a window in the front right corner of the home.

“Fire damage was contained to the room of origin, but the home sustained heavy smoke and heat damage.”

The cause of the fire is being investigated, according to Rural Metro.

While the American Red Cross is assisting the family, the voucher they were given for lodging could not be confirmed without identification, which the Kissiahs had lost in the fire.

With the site plan, or preliminary plat, approved for townhomes in Farragut Town Center at Biddle Farms, developer Budd Cullom can move to the next step.

Farragut Municipal Planning Commission unanimously approved, during its meeting Thursday, Nov. 17, the plan to build 47 units — more than seven units per acre — in a portion previously designated as “future development.”

“The buildings will be mostly brick with a mixture of two- and three-story units with some terraces,” Community Development director Mark Shipley said.

On another matter, after lengthy discussion, developer Steve Williams asked for a postponement of action regarding his concept plan for Virtue View Farm subdivision, at which he is allocating 13 estate lots on two tracts near the intersection of Virtue and Evans roads.

The lots range in size from 1.2 acres to almost 12 acres. Among the variance requests, the bones of contention were a request to have a private 20-foot-wide road and variance for the Town’s requirement for pedestrian facilities — sidewalks or walking paths.

Vandals do damage in 2 parks

Farragut Parks and Recreation director Sue Stuhl said the damage was “minor” and no dollar assessment had yet been made as of Friday, Nov. 25.

According to published reports, Federal Bureau of Investigation agents, as part of an Internal Revenue Service investigation, were serving a warrant at a home along Wyndham Hall Lane Tuesday, Nov. 22, where they found a woman with a self-inflicted gunshot wound. Evidence technicians with the FBI, Knox County Major Crimes Unit and others were dispatched to the scene. The unidentified woman later died from her injuries, reports stated. The investigation is being led by the IRS, according to the FBI, which also noted the incident is subject to an internal review by local and federal authorities — and no additional information would be immediately available.

• At 6:19 a.m., Sunday, Nov. 27, a Knox County Sheriff’s Office unit responded to Clarion Inn and Suites along Campbell Station Road on report of a vehicle burglary. Victim/property owner said her vehicle (Black Honda Odyssey) “had been broken into during the night and things were missing,” the report stated. “The manager on the scene has video of the break-in, and the suspect broke the back window with a rock at 2:30 a.m., stealing multiple items from the vehicle.” Value of loss was listed at $3,330.

• At 1:21 p.m., Saturday, Nov. 26, a complainant called KCSO Teleserve Unit to report a theft from a Deanwood Lane residence. Complainant advised an unknown suspect opened her envelope and took her passport without permission. Value of loss was listed at $100.

• An annual presentation by a retired Farragut Middle School history teacher, which covers the events leading up to World War II, is set for early next week.

Frank Galbraith will discuss the end of World War I, the roaring ’20s, organized crime, the Great Depression, Adolph Hitler coming to power and the attack on Pearl Harbor during “A Day of Infamy,” which begins at 7 p.m., Monday, Dec. 5, in Farragut Town Hall. Veterans are invited to enjoy light refreshments and Farragut Museum tours starting at 6 p.m.

All veterans, especially WWII veterans, are encouraged to participate. The presentation is free and no registration is required.For more information about “A Day of Infamy,” contact Historic Resources coordinator Julia Barham at 865-218-3377 or visit museum@townoffarragut.org.