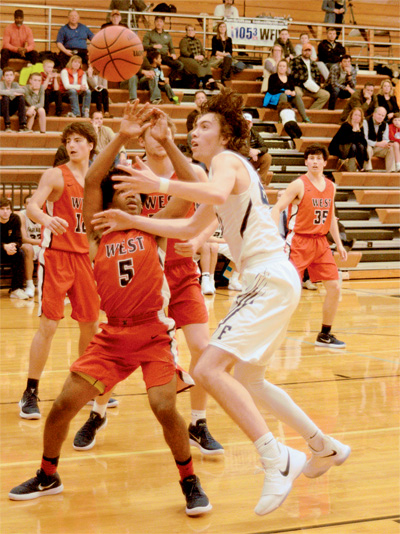 But holding the Runnin’ Rebels scoreless for almost seven minutes in the second half, “we came out with a lot of fire and played better defensively as a team,” he added.

“I thought our effort defensively wasn’t very good in the first half. We weren’t communicating very well,” Higgins said. “We weren’t closing out on the shooters, the guys that we know are shooters.

“I challenged them at halftime to get back to being ‘us,’ a gritty defensive team that’s engaged and active and we’re communicating and we can guard anybody,” he added. “And that’s what they did in that third quarter.

“It was the third quarter that won us this basketball game.”

“Coach just wanted us to show more energy and be smarter with the ball. We just started running our offense like he taught us,” said Tharrin Shuler, FHS senior post who scored 12 points.

“I thought our post guys, in the second half, played wonderful: Tharrin, Trev and Alec,” Higgins said. “... And Chris, Andy [Howell] and Ethan [Sherrill] took care of the basketball and made smart decisions.” Sherrill, a senior, scored nine; Howell, a junior, had four.