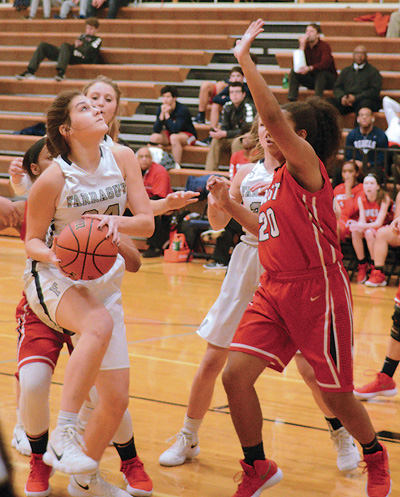 “We played a lot better than we have been. I think we played more as a team instead of individually,” said Claire Wyatt, FHS sophomore wing who scored a game-high 12 points.

“I though Claire did a good job of being aggressive with not only shots, but making plays,” Lady Ads head coach Jason Mayfield said.

“I feel like we need a lot of things to work through. I feel like we definitely did,” said Madison Hodge, sophmore point guard who scored six for Farragut — both three-point baskets. “Normally I am [a three-point shooter], but they haven’t been falling for me lately. Hitting those two was a real good thing for me.”

“Bri Tookes made a big [three-point] shot there that kind of got us going” in the second quarter, Mayfield said about his sophomore guard who scored six. Brooke Christian tallied five for the Lady Ads (12-12 overall, 7-7 in 4-AAA), with Morgan Carbaugh adding four. Lauren White had two points.

“We’ve been in a little bit of a funk lately, offensively especially,”