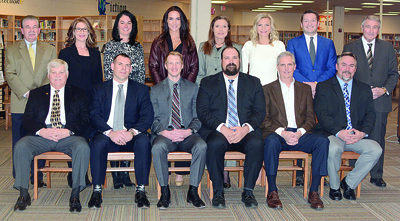 But his relationships with those holders, Jason Price and Benson Scott, went much deeper.

With Price the holder during Hall’s first UT game as a freshman in 1995, “he said, ‘man, let’s go down to the other end of the field for warm-ups and let’s pray; let’s just ask God to take care of us and bless us,” Hall, a Farragut resident, said as guest speaker for Sixth Annual FHS Hall of Fame Induction Ceremony.

With 13 nominees inducted — 12 ex-Admirals players and one coach — and two Service Award honorees recognized — the Ceremony was held Saturday evening, Feb. 3, in the school’s Commons.

When Price graduated after the 1996 season, “All of a sudden Benson comes along. … Benson and I would do the same thing,” he said. “Benson and I had so many great experiences at UT in 1997 and 1998.

“What was impactful for me with Benson ... that was the time God began moving in my life and drawing me to faith in Christ,” Hall said.

“… I was calling myself a Christian, but there were these other guys, including Benson, that actually lived the Christian life,” he added. “I thought to myself …

"my life looks a lot different than theirs.’

“So, in the Spring of ’97 God began this movement inside of me that set me on a different path. Benson, of course, was there.

“And still, to this day, he is a huge part of my life, a great friend and a great encouragement for me.”

As for Price, “Jason was a Hall of Fame inductee in 2015, and continues to be a good friend,” Hall said.

“… Jason gave me so much confidence and encouragement, and he always believed in me,” he added.

Forming a friendship with the late Chad Starliper, one of the 2018 inductees as a golf star [Class of 1993], Hall said, “Chad and I worked at Rather & Kittrell; we worked across the hall from each other.

“Chad had an influence on me in a number of ways: professionally, in finance, he was so technically sound,” Hall added about the 1990 state champion medalist who also won the American Junior Golf Tournament championship in 1992 while qualifying for U.S. Open Junior Amateur [1990] and PGA Junior Championship [1991] .

As for Chad’s Christian faith, “He had an unbelievable testimony,” Hall said. “So, as I began to grow in my faith … I would always go to Chad and ask him questions.”

Moreover, “He’s without question the most talented person I think I’ve ever met in my life,” he said.

About the lone coaching inductee and his dedication to coaching FHS varsity boys soccer, “you actually had people like [the late] Wallie Culbreth who designate their own time and money to helping young men achieve and excel and be great at what they do,” Hall said.

Julie Crews, an All-state soccer defender for the Lady Ads from the Class of 1988, also earned All-American honors at Lees-McRae College.

Rhonda Snow, a star centerfielder at FHS [Class of 1982], went on to earn NJCAA All-American honors at Cleveland State Community College before becoming an All-Conference center fielder at Southern Illinois.

Chris Martland, track & field star from the Class of 2000, was a leg on the state champion 4 X 400 relay team as a senior, helping the Admirals win yet another state crown.

At Belmont, Martland set seven school records — six of which still stand — then as a post-graduate transfer to the University of Tennessee finished fourth in the 2005 SEC Championship Meet decathlon.

Alyssa Randolph, Class of 2008, helped the Lady Admirals golf team capture a pair of state championships [2004 and 2006] and two other state runner-up finishes [2005 and 2007]. Randolph ended her FHS career as state runner-up medalist.

She also earned Tennessee Player of the Year honors her senior season.

In 2006, Randolph won four consecutive tournaments on the Southeastern Junior Golf Tour and qualified for the U.S. Girls Championship.

She also was a golfer at two SEC schools: Kentucky and Ole Miss.

Meredith Lance Gunn, basketball star [Class of 1994], set what was then the FHS program’s all-time career points total her senior season. She finished with 1,521 points.

Darren Rothenberg, a two-time All-state offensive and defensive lineman [Class of 1996] who also earned Male Scholar Athletic of the Year honors from Tennessee Athletic Coaches Association as a senior, went on to be a starting offensive lineman for three seasons in the SEC at Vanderbilt.

Rothenberg also represented the Class of 2018 as speaker.

About those who influenced all the inductees, “The teachers that encouraged us and challenged us and wouldn’t let us fail. Our parents who sacrificed for us,” he said. “… The coaches who impacted our lives, like [the late] coach Buddy Fisher [varsity football head coach 1987-1995].

“Thank you to the Hall of Fame Committee and all those who put this together tonight.”