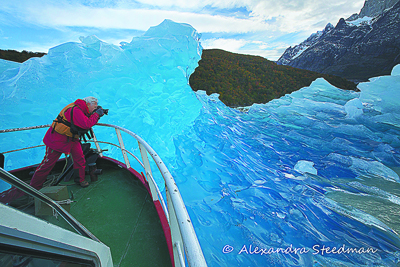 Alexandra Steedman, who was traveling with Mike Naney, photographed Naney while he captured dramatic icebergs in Chili.
A local nature photographer, Mike Naney has taken his passion for nature and blended it with his love

“A mutual friend knows one of the people on the [Farragut] Arts Council committee that schedules artists, Sandy Dean,” he said. “I was asked to participate.”

The exhibit, “Fire and Ice,” includes photographs from “two travel adventures my wife [Linda] and I took in 2017,” Naney said.

In February 2017, the Naneys traveled to Hawaii Volcanoes National Park.

The exhibit includes two photographs of lava “flowing into the ocean in a pretty dramatic fashion,” Naney said.

“In Hawaii, volcanoes are one of the only places where lava is erupting pretty continuously,” he added. “Current sequence of lava flows has been going for something like 34 years.

“My wife and I have made previous trips to Hawaii and seen active lava.”

However, Naney said he had two objectives in taking the trip to Hawaii: to see the lava flow again and to enjoy the island — go snorkeling, hunt for whales, kayak and visit three or four islands on the Hawaiian chain.

Naney said he was impacted most by “the spectacular lava flow we saw in Hawaii and whales that were in pods, so that if it’s mating season for whales, you have males fighting over females and you see pretty dramatic whale behavior from the ship.”

Then in August 2017, the Naneys traveled in the fjords of eastern Greenland, on a 100-foot sailing ship, to look for icebergs and see the country’s beauty.

The highlight was just what they came to see.

“The icebergs were amazing, in all sorts of shapes, forms and colors,” Naney said. “It was beautiful.”

A retired geologist at Oak Ridge National Laboratory, his former career attracted Naney to those locations — but photography has been a long-time hobby.

A California native who now lives in Knox County, Naney was introduced to photography by his family.

“My family passed on to me family cameras when I was 8 years old and taught me how to use them,” he said. “As I got older, my father passed on a more sophisticated camera to me, and it’s been a hobby all my life.

“I enjoy it when there’s a personal emotional reaction, that they find something in the photograph that, I guess you might say, ‘speaks to them,’” Naney said.

“I used [cameras] in my work, photographing when I was out in the field. I’m just drawn naturally to things in nature. I think that’s a part of why I trained in geology.”

Naney also sells his photographs, participating in a handful of art shows during the year. He is a member of Art Market Gallery cooperative in downtown Knoxville.

“Each month, the work of an artist or group of artists is featured in specially designed cases on the second floor of the rotunda in Farragut Town Hall,” said Wendy Smith, Farragut Public Relations coordinator.

For more information about Naney’s exhibit or to access a Featured Artist of the Month application, contact Lauren Cox, ParksandRecInfo@townoffarragut.org, call 865-218-3372 or visit towoffarragut.org/artsandculture