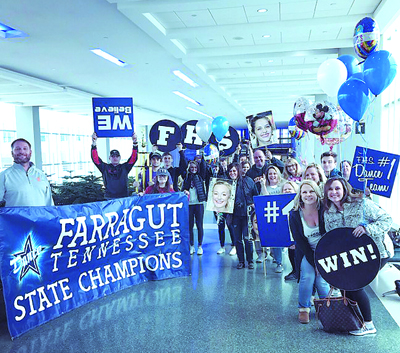 It is the first national title in program history.

“We are beyond excited,” head coach Adonia Adams said about the win, which was announced following two very long days.

“The best feeling was not [when we heard] our names called out for first place, but hearing the second-place team being named, and us knowing that meant we won,” she added. “Everybody was jumping up and down and screaming — it was all just pure joy and happiness.”

The win was made all the sweeter by the team’s second-place national finish in Small Varsity Pom, besting 20 other teams in that category.

“It was the first year we placed in the top three in either division, so we were pretty excited,” Packer said.

Adams, who has coached the team for the last decade, said the happy group celebrated well into the night, finally collapsing after 1 a.m. the next morning.

The Admirals still are floating on air, especially since the celebrations continued as soon as they stepped off the plane at McGhee Tyson Airport early Tuesday, Feb. 6, where they were greeted by a boisterous welcoming committee of friends and family members.

“I just can’t wrap my head around how our hard work paid off, and I’m so proud of our team,” Packer said. “We always say Nationals is the best weekend of the year. And this year, it is so much more.”

Team members also were interviewed at WVLT-TV Channel 8 Wednesday afternoon — and while there found out Knox County Schools would be closed for the rest of the week.

“The girls felt like that was a prize, too,” Adams said of the additional two-day break to further recuperate and bask in the glory of their wins.

Adams she said she had a “really good feeling” about this year, and had actually predicted the win three years ago.

“We didn’t place that year, but I could see how talented the freshmen were, and I told them by the time they were seniors, that they were going to win,” she added.

“They all laughed at me, but they made the finals the next two years, and this year, they did it.”

This year was a tough one for the team in a couple of ways. Their initial competition routine, typically perfected early on, was scrapped right before Thanksgiving. It had been problematic to the point of injuries for some members, one of whom left the team completely.

“We got thrown so many curve balls this year,” agreed Thayer, who broke her foot but managed to stay with the team.

The remaining girls threw themselves into the new choreography with gusto, and willingly put in at least two hours a day during the week — and even more on the weekends perfecting it.

“We had to pull together, and were practicing every day in January,” Thayer added. “It was so much more work. It was intensive and tough, but so worth it.”

“People do not realize how many factors go into these competitions,” she added. “There are so many elements [to master] to reach the highest point [levels].”

The team competed in three rounds in each of its two categories. Each round was cut by half as the victors emerged.

Farragut kept progressing, even with one member so sick she had to be replaced between rounds.

“Something I have come to realize is how proud I am of the growth,” Packer said. “My freshman year, we did not make it out of the prelims; but it is extraordinary how, every year, we just came together and proved what [can happen] when you work hard.”

“We [also] could not have done it without the support of principal Ryan Siebe and athletic director Don Dodgen,” Adams said. “They worked to get us our own dance room, which we had this year for the first time, ever. We were able to practice in one location, on the proper [flooring], and I know that is one of the main reasons we won.”

Keeping an eye on other high-performing teams also was top of mind for Adams.

It was especially nerve-racking because that team actually beat FHS in the first round, Adams said.

Additionally, Adams was dividing her time between both the FHS Dance Team, and the FMS Dance Team, both of which were competing in the nationals.

“It was really crazy,” she admitted. “There were a few times when I would be in one place, make sure everything was under control, then go to the other team.”

“I was as nervous as I have ever been,” Adams said of the wait time. “It was hours and hours of winners being named, and both of our divisions were so large that made the announcements that much later.”

When the winners had finally been announced, the Admirals were not only thrilled with their own wins, they were also happy for Seaton High School’s narrow victory over them in the small pom category.

“We go to camp with [them] every year, and they are just a great team,” Adams said. “Our girls were standing up and cheering for them, too.”

The Nationals honors were the icing on the cake for the dance team, which won the reverse of the national competition at the state level, receiving first-place honors for the small varsity pom and second-place in small varsity jazz.