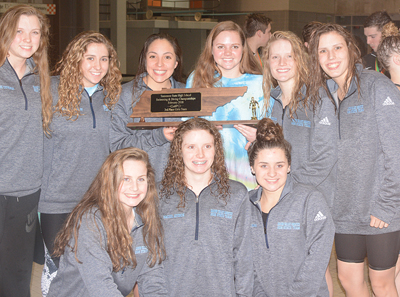 Hardin Valley Academy was the top local finisher on the girls side, third, and as a combined team, fourth, after two days of swimming and diving competition ending Saturday, Feb. 10, in Allan Jones Aquatics Center on the University of Tennessee campus.

“We have a really strong girls team. … We’re really proud of what our girls accomplished — and our boys, too,” Hough said. “I think to be the fourth best [combined] team in the state is pretty good.

“We knew the Baylor girls [overall team champs] and the Harpeth Hall girls [gender state champs] would be really tough. I think Maryville [No. 2 overall] and Bearden also had a really good weekend,” he added.

“Carissa Armijo had some really good swims,” which included third in the 200-IM [2:03.23], he said. “Emily Aycock, Rachel Aycock, Abby Aycock — the girls who have been carrying us all year.”

John Murtha of FHS was 16th in men’s 1-meter diving.