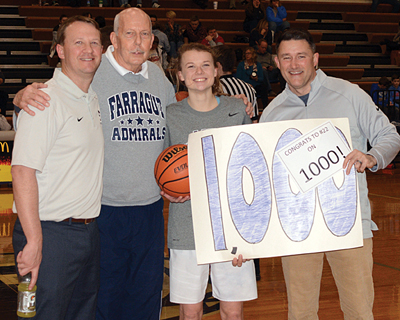 “Keayonna Bourne’s and Sydney Chapman’s defense was absolutely amazing tonight,” said Morgan Carbaugh, junior wing whose fourth-quarter free throw gave her 1,000 career points as part of a game-high 18. “They had ball pressure and they had the steals, and obviously turned it into offense.

“Definitely a great defensive effort from those two, and collectively all of us,” she added.

Missing her entire sophomore and junior seasons because “of two torn ACLs” in her right knee, “it kind of still affects me to this day,” Bourne said about the slow recovery.

“But as you saw tonight, I try to fight through it,” she added.

Looking back, “It’s frustrating — but it could be worse,” Bourne said. “I could have never been able to play again. ... Now I’m grateful to have the opportunity to come out and help them with my presence.”

“Her injury just keeps creeping up, but as you could see tonight she just went out there and battled,” Lady Ads skipper Jason Mayfield said. “We lack that sometimes when she’s not in the lineup. She provides that for us — that intensity and that tenacity and being a competitor.”

About Carbaugh’s 1,000-plus points, “It was a good achievement for Morgan,” Mayfield said. “We don’t talk a lot about individual achievements, but not many people who play high school basketball get to 1,000 points.”

As for other Lady Ads, “I thought Claire [Wyatt] made some big shots,” Mayfield said about Wyatt’s seven second-half points. “Kind of got us started there by making a three[-point basket].

“I thought Madison Hodge did a lot of good things for us,” he added about the FHS sophomore point guard, who scored four. “She was a difference-make; she could get to the rim any time she wanted. Really playing confident.”

The Lady Admirals, the No. 6 seed in the District 4-AAA Tournament, which began this week at Lenoir City, end regular season play 13-13 overall, 8-8 in district.