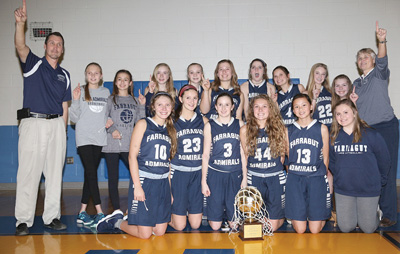 “I just feel truly blessed to have had the opportunity to coach these girls for the last three years,” Davidson said after her Farragut Middle School girls basketball team outlasted South-Doyle 30-26 to win the James A. Ivey Jr. Memorial Middle School Basketball Tournament, for a second straight season, in KMS’s Thomas L. Duff Memorial Gymnasium.

“All of these eighth graders are special and we couldn’t have done this without [assistant coach] Mike Henry. He’s the inspiration to every girl on this team. He’s the leader of our FCA chapter on campus.”

When the second-seeded Lady Admirals posted its slim victory over the top-seeded Lady Cherokees, it not only marked Farragut’s second consecutive tournament final, it also avenged a 43-42 regular season loss to South-Doyle in FMS’s Bobby J. Henry Gymnasium.

“This game was a lot like the first one. In the first one, they won 43-42, this time we won,” Davidson said. “We lost to South-Doyle and we lost to Carpenters Middle School out of the Memphis Area.

“We’re 22-2 and we lost to two very good teams. South-Doyle is a great team and their coach [Eric Brabson] does a great job with their team, and I know that they’ll be right back here next year.”

South-Doyle (23-4) scored the game’s first six points before Farragut’s Avery Strickland, tournament Most Valuable Player for a second straight season, scored the final six points of the first quarter and helped FMS pull even by the end of the opening frame.

“Avery is a calming influence and she really settles our players down when she’s on the floor,” Davidson said.

Avery was joined on the All-tourney team by teammates Keeleigh Rogers and Ella McFerran.

Keeleigh, who finished the contest with seven points, scored six in the second quarter. Avery, who led the Lady Ads with 11, added a free throw. Keeleigh and Ashlyn Sheridan also scored in the frame as FMS opened a 17-12 lead at halftime. Both Ashlyn and Ella scored four points.

“The second quarter was what won us the game,” Davidson said. “We played great defense.”

South-Doyle battled their way back and trimmed the lead to 22-18 after three quarters.

The Lady Cherokees pulled to within 27-26 on a bucket by Ranisha Gates with 2:40 to go.

Aubrie Stackhouse made Farragut’s last field goal when she scored with 1:41 left. She would finish the game with four points.

Keeleigh sealed things with a free throw with 23.1 seconds remaining.

“I’m really proud of these eighth graders and the things they’ve accomplished this year. Avery keeps things calm. Ella plays great defense,” Davidson said. “Madison Foshie had a great year. She was hurt during the tournament, but we could’ve used her tonight. Ashlyn was a guard playing in the post after Haley Prince [moved to Oklahoma]. Maci McWhirter was outstanding as a wing. She really improved her 3 point shot and provide great leadership for our team. Brooke Vaught and Emmie Harville also had great years for us. I’m blessed to have had all these kids for the last three years.”