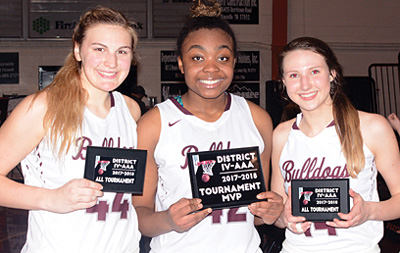 The victory was Bearden’s 11th consecutive win and 12th over a district foe after the Lady Bulldogs dropped three of their first four district contests to open the league campaign.

“I’m just so proud of these girls,” Bearden head coach Justin Underwood said after his squad surrendered just four second-half points to the fourth-seeded Lady Rebels, who advanced to Monday’s championship game with a 51-49 upset victory over top-seeded Hardin Valley Academy Saturday, Feb. 17. “We have a really unselfish group of girls and I’m extremely proud of them.

“When these girls started 1-3 in the district, they really committed. They worked hard all the time.”

The Lady Bulldogs (24-7) last lost on Jan. 13 when they dropped a decision to Norcross High School out of Georgia. Bearden actually split the regular-season district title with HVA. But the Lady Hawks, who dropped a 44-41 decision to William Blount in Monday’s tournament consolation game, were awarded the tournament’s No. 1 seed by virtue of a tie-breaker.

Bearden did as expected — as it was the preseason pick by many to claim the district title. And the Lady Bulldogs won it in impressive fashion.

They fell behind Maryville (21-7) 8-2 early as the Lady Rebels started hot, especially from behind the 3-point arc. Maryville’s Gracie Midkiff made a pair of long-range jumpers and Courtney Caruthers nailed another as the Lady Rebels opened an 11-5 lead before Bearden stormed back to tie the game 11-11 by the end of the opening frame.

Annaka Hall, a junior wing player who had suffered a hand injury recently, scored all five of her points in the first quarter (including a 3-pointer) as she came off the bench early.

“Having Annaka back was really big for us,” Underwood said about one of three Lady Bulldogs All-tournament selections. “She had a great tournament and she’s a spark plug for us.”

She gave the Lady Bulldogs their first lead of the contest when she converted a pair of free throws early in the second stanza to make the score 13-11. And from there, Bearden never looked back.

“After we started the district 1-3, we started to grow together and we’ve been working on our defense,” said Jakhyia Davis, BHS sophomore post who was named tourney Most Valuable Player [12 points Monday]. “We have some great seniors and I want to help them get back to state.”

Bearden did the bulk of its damage from inside against the Lady Rebels on this night. Senior Grace van Rij scored 11 of her game-high 15 points after halftime and sophomore Davis scored 10 of her 12 points over the first 16 minutes.

“We’re unselfish and we really trust each other,” said van Rij, who also was selected to the All-tournament team. “We have such great team chemistry.”

Maryville head coach Scott West was frustrated after seeing his team score only four points after halftime. “I wasn’t happy with anything in the second half,” he said. “The way we played tonight, I could play five girls from the YMCA and they could beat us.”