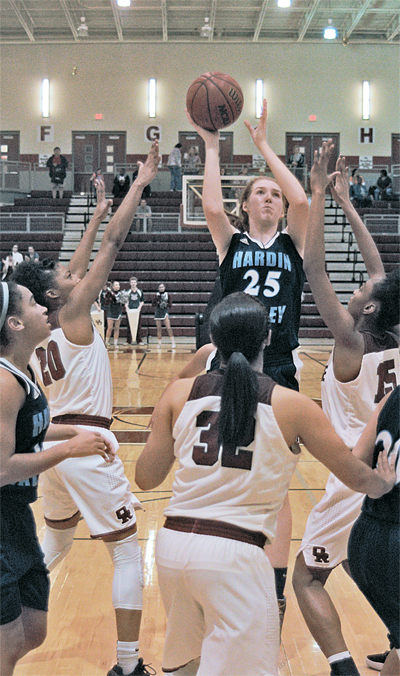 The result, in this win-or-go-home Region 2-AAA quarterfinal at ORHS, was a 55-39 Lady Wildcats victory Friday night, Feb. 23.

“A lot of times their defense scores points for them,” she added. “They were able to do that tonight.”

However, “I was so proud of our girls because our girls took the gameplan and executed it the best they could,” Galloway said. “I felt like we got some shots that just didn’t fall that normally fall for us.

“And if they had fallen at the time at which they were shot, it could have been a momentum swing,” she added. “You just never know what could have happened.”

“I thought we played great half-court defense,” Galloway said. “And I thought, for the most part, we had good transition defense.

“I thought our girls fought hard,” she added.

After an 8-0 Lady Wildcats run to begin the fourth quarter, HVA never got closer than within 13.

“Our girls did a really good job defensively,” Trent said. “Our big focus is ball pressure. We want to put pressure on other teams and make them have to work for every single thing they get offensively.

“We wanted to push the ball in transition and make them run. We thought we could wear them down if we got them playing a full court game the whole game,” she added.

“… Cornelius, she’s a great player. Our main focus was to be physical with her and to make her work,” she added. “And to have great back-side help. And we did a really good job of that as well.”

Galloway became emotional when speaking about her six seniors, which also includes wing Autumn Fields and guard Landin Khiemdavanh. “What you don’t see is the stuff they do outside of the floor. They help form a strong bond between the whole team,” she said. “They’re great leaders and they’re great girls. They’re sisters, they battle for each other.

“It’s been fun to watch — it’s fun to have been a part of that for four years with those six girls.”