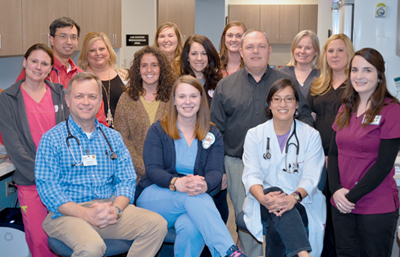 KPA moved to the Admiral Pointe Building at 116

“The move went surprisingly well, and our patients really like it,” said Jones, who was in charge of finding the new location.

“Our patients love [the new offices],” reported Yen, who actually started the Farragut practice in 1996 in its first location on Kingston Pike.

Jones enlisted the help of a commercial real estate acquaintance, and the Admiral Pointe Building was secured and purchased fairly quickly, Jones said.

One main criteria was that the practice would remain within the Town limits.

“We were committed to staying in Farragut,” Jones said. “Most of us live in the area, and we wanted to stay here.

“We have a lot invested in this community.”

Although the Admiral Pointe Building had been used for medical-related businesses in the past — including The Goodman Center and Knoxville Foot and Ankle, two tenants that remained — KPA doctors decided on some major interior renovations.

They chose to gut the existing space, and oversaw construction of their suite of offices, along with two additional suites they plan to lease.

KPA Farragut expanded from 6,500 to 8,000 square feet, increasing not only the number of exam rooms from 18 to 22 but also enlarging its shared lab space.

“This building is great,” Yen said. “And, the move could not have gone any better.”

Jones said he was amazed the time line was so quick, noting it was just 12 months and 12 days “to go from zero to moving in.”

Jones credited realtor John-David Roddy of Providence Commercial Realty, which will manage the property, along with the project’s architects and builders for the successfully finished product.

“All of [the people involved] did a very good job,” he said.

Some final touches still need to be added. For example, each doctor is allotted four to five exam rooms they

will be charged with personalizing. Jones, for instance, is a science fiction fan and plans to decorate accordingly.

The group also plans to add more and larger signage, although he said most patients have not had a problem finding the new offices, as the practice began advising of the changes well in advance.

“If anything, our traffic may have even increased,” Jones said, noting a traffic light onto Concord Road helps control the flow.

Now that the practice has enough room for its patients and employees, Jones said over time, it may expand in another direction by adding another physician.

The Farragut office is one of five operated by Knoxville Pediatric Associates throughout the region.