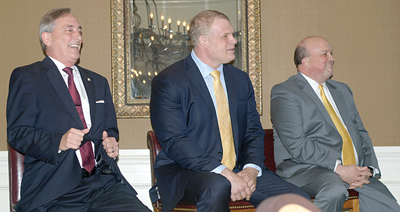 “I liked what I heard,” Bruce Giles, general manager of First Utility District of Knox County, said about the forum. “I think there are a lot of in-depth issues that need more than 45 minutes to address. They were talking about roads and that type of thing.

“There are lot of other things that go into developing things like that, [such as] developing a relationship with TDOT, like we do. We deal with it all the time,” he added. “I’ve actually invited each of [the candidates] to our place because we’ve got wastewater services for 90,000 people in this area, and I want to sit down with them, lay out our business plan, infrastructure replacement plan and human relations plan and see how they overlap with each of their ideas.”

“I thought they all did a great job,” attendee John Greiss said. “Certainly, they are three different individuals but the point about being committed to the community resonated between all three of them.”

“I think there’s some good character in our candidates here,” said attendee Roger Jones, mayor of Greene County. “They said a lot of political things but again, I think the three [men’s] characters are worthy of being mayor of Knox County.

Questions focused on school security, the county’s financial condition and the possibility of taxes.

For instance, while referring to the tragic shooting in Florida, Hill asked candidates about what they would do to improve safety in Knox County Schools.

Anders, a 6th District Knox County Commissioner who also is a lieutenant with Knoxville Police Department, said he has worked with Gus Paidousis, Knox County Schools security chief, for 23 years.

$4 million to $5 million to improve security — locking front doors with buzzers, putting in cameras, but he said the county shouldn’t be satisfied with those improvements.

One of those improvements, Anders said, is the KCS alert

”We have to continually measure our capabilities of security,” he said. “I think it’s important we consistently do that.”

Jacobs, owner of Glenn Jacobs Insurance and World Wrestling Entertainment Inc. wrestler, also referred to the alert system, which recently was not working when there was an alleged threat from a student.

“That is completely unacceptable and that needs to be reviewed,” he said. “It’s not a personnel issue; it’s a system issue. It needs to be fixed.”

“I have grandchildren in Knox County Schools so this is something I think about a lot,” Thomas, At Large Seat 10 County Commissioner, said about school security.

Jacobs and Thomas said they would be against raising property taxes.

“The county is in really good fiscal shape,” Jacobs said. “There are things in the budget we could look at — some inefficiencies that need to be addressed. I think we have some opportunities with public-private partnerships.”

“I think we have plenty of funding coming in,” Thomas said. “Lately we’ve had tremendous growth

While Anders agreed Knox County is in good fiscal shape, he warned, “If you look at our debt in the last three years, it has increased.

“We had a capital plan to spend out in the next five years $110 million,” he added. “So to sit here and say today that I’m not going to raise taxes — I don’t want to raise taxes. I don’t think anybody whose running for office wants to raise taxes — there’s growth we can live under, but I certainly don’t know what’s going to happen three years from now.

“If we have another 2008, our county doesn’t have enough money to run for two years. It takes $2.5 million a day to run our county.”