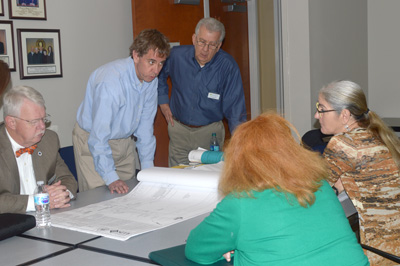 “We’re excited about this,” Farragut Alderman Louise Povlin said during a Farragut Staff-Developer meeting Tuesday, Feb. 27. ”This is really perfect.

“[At Home] has been [off Outlet Drive] at least a couple years,” Povlin added. “It was a tough location for them. This one is so much better.”

“They are excited about being over there [along Parkside Drive],” said Annette Hommel, a civil engineer with Site Inc., who presented site plans on behalf of the developer, Callaway Architecture, during the Town meeting. “They wanted to make the building larger, but they are settling for a smaller building just to get over here.”

Gander Mountain closed its doors at its 11501 Parkside Drive store in spring 2017. At Home Décor Superstore would move from its current 11221 Outlet Drive location to the 8.09-acre site in Turkey Creek. Hommel presented plans to expand the proposed site, owned by Jensen Investments, by 14,569 square feet.

The total area would be 109,914 square feet, according to the plans.

“They’re wanting to move pretty quickly — as soon as we can get permits,” Hommel said after the meeting.

Near the site is a greenway, which has its own designated parking.

“We will have signs there, but we won’t really know if someone is parking there for the greenway or if they are going there to go shop,” Farragut Community Development director Mark Shipley said.

“We hope if they go to the greenway then they will go in and shop, too,” Hommel said.

“I have to believe you have plenty of parking, right?” Povlin asked.

“Actually, they are under-parked, but we have a provision in there now,” Shipley said. “They can have the [Farragut Municipal] Planning Commission approve that, though, now that we’ve changed the parking requirements. Used to, you couldn’t do that.”

“The ratio they propose is 3.16,” Shipley said. “The requirement is 3.5. All they need to demonstrate is, based on their use throughout the country, that a 3.16 ratio is sufficient.

“I would love it if it was fully parked, obviously, because they would be doing a great business,” he added. “But it’s very unlikely that it’s going to be even remotely fully parked. I don’t have a problem at all with it.”

Alderman Ron Williams asked about handicap parking, and Hommel answered those spaces are based on the number of [total] parking spaces.

“I think seven should be right,” she added.

“It just doesn’t seem like very many, compared to what you see nowadays,” Williams replied.

Shipley said most of his comments related to architectural concerns, such as lighting, and a storage area.

“That has to be screened just like a dumpster,” he said.