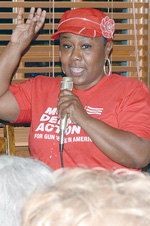 Gallman
Citing the need to involve God in her campaign and in her term as Knox County Mayor if elected, Rhonda Gallman spoke with confidence — yet recalled tough times in her life — during 5th District Democrats’ most recent meeting.

“This campaign is going to be beautiful. I’m going to bring so much excitement,” Gallman said Thursday night, Feb. 15, during the 5DD monthly meeting in Rosarita’s Mexican Cantina off Lovell Road. “Not only am I making history as being a black woman running for Knox County Mayor, my team is going to make history.

“I want you guys to welcome us — and I want you to dissect me like a frog,” she added.

“I believe in my heart I’m going to win, I really do.”

Nicknamed “Mousey,” which she embraced during the speech, Gallman said before throwing her hat into the ring, “I prayed about it. I was advised by my [campaign] team to be who I am … I asked everyone on my team to fast and pray before they gave me their final answer” to join the campaign.

“I’m on Facebook right now, and I use that as my platform,” she added. “I ask a thousand questions, and I am a very good listener. … I search for your heart.”

Concerned for the welfare of children, “We have become so consumed with ourselves, we are fighting and chasing for success, that we are leaving all the children behind,” Gallman said.

In terms of solving problems, “We need to stop eating and meeting and talking about what we’re going to do [unless] it’s time for the rubber to meet the road,” she said. “It’s time to get up and do something.”

“But if God is going to reach His hand out to us, forgive us for what we have done, we have to do the same thing, too. I’m out there in the street talking to the homeless.”

Though Gallman didn’t add specifics, “I do believe that Knoxville is going to be the blueprint for the United States of America — I believe that wholeheartedly,” she said.

Gallman said she’s waiting to “get all the information; I want to bring it to the table [concerning] how we can save and fight the Opioid problem that we’re having right now; and crack cocaine and meth.”

She advocated “bringing preventative measures, and stop coming in on the tail end of everything.

“Regardless of what you think of me, you have to like what I do because I’m fair — I promised my grandfather on his death-bed that I would be fair and keep God in every single thing that I do,” Gallman added. “I made that promise to him at 20 years old.”

A former state representative candidate who grew up in East Knoxville, Gallman talked about her family. “My paternal side is Caucasian and my maternal side is Indian,” Gallman said. “How can I not love one, and love the other one more? My grandmother was just as pale as some of your in here, on my father’s side.

“I was taught love and to help,” she added.

Gallman’s opponents in the Democratic Primary are Rebecca Deloa and Linda Haney.