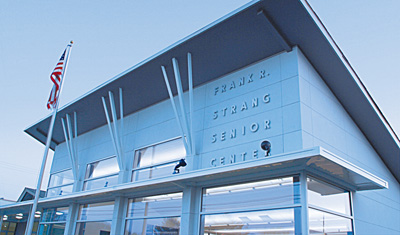 Frank R. Strang Senior Center was dedicated Feb. 14, 1998
More than 20 years ago, Ron and Eileen Price and several friends had been meeting regularly at the Episcopal Church of the Good Samaritan, but they wanted a place of their own.

“We just wanted a place where we could get together and share a cup of coffee,” Eileen recalled. “Anywhere west.”

So began a search that soon culminated in what is now known as the Frank Strang Senior Center, 109 Lovell Heights Road, which will be celebrating its 20th anniversary beginning at 11:30 a.m., Wednesday, March 14.

The Prices comprised a core group who began working with then-Knox County Commisseners Mike Ragsdale and Frank Leuthold on finding an appropriate location.

“We knew of only one senior center at the time, and it was very far away,” Eileen said.

Pretty quickly came news that the former Farragut branch Knox County Public Library site soon would be vacant with the construction of a new facility along Campbell Station Road.

“They asked us if that building could be of use to us, and we were thrilled,” Eileen said.

“The county was extremely supportive, and especially [Ragsdale and Leuthold] were staunch supporters [of the project].”

“We worked very hard, and finally got [the Center], and all the others [Knox County] centers came about after that,” Mauer said.

One of the key workers toward the project was Frank R. Strang; and upon his death, it was decided to name the center in his honor.

While it has grown during the last two decades to a 5,500-member mailing list, when the Center first began it had a membership of 50, said coordinator Lauren Monahan, who has served in that capacity for 18 years.

“[The Center] has gotten so big and active, that the Knox County Commission decided to renovate and enlarge it, and also purchased the land behind the center to make it into a parking lot.”

She said a myriad of classes and programs have swelled the membership considerably.

“Our programs are wonderful,” Monahan said. “Each one helps someone in a different way. Tai Chi has been here the entire 20 years, four classes a week, and it has never dwindled.”

The coordinator said the term “senior center” might have a negative connotation, but that would be misleading.

“We do not sit around and watch TV here at our center. We have fabulously active classes, creative programs and educational sessions.

“We also have some really great parties.”

One of which will be the anniversary celebration, which will feature Knox County Mayor Tim Burchett and music by Ed Nieden’s Big Band.

“Finger foods will be provided, along with a special cake and carnations for the ladies,” Monahan added. “We want everyone to come out an dance up a storm and party with us.

“It will be a big day for the Center, with organizers already looking to the future.”

Knox County Commissioner John Schoonmaker, representing Fifth District (including Farragut), went a step further by sharing the strong likelihood that the Center will be relocated to a larger facility in the not-to-distant future.

Regardless, the Center remains dear to those who have come to love it — just as its founders did.

Even thought Eileen’s husband has since passed away, and she had moved, she still frequents the center.

“It holds a special place in my heart,” she said. “It is, and has always been, a place of friendship [for me], and I make new friends, and learn new things all the time.

“I love the classes,” Eileen added, and said she had recently tried line dancing, which she said she enjoyed very much.

“It keeps us active, keeps us fit, and keeps us thinking.

“And we can still just sit and have a cup of coffee, which is really nice.”