FHS CodeTN team once again No. 1 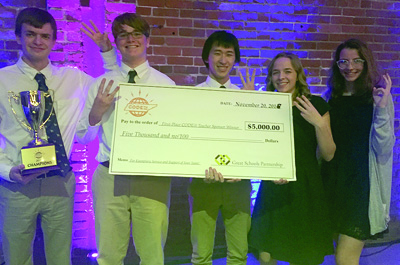 The school has excelled in coding thanks to a push by Knoxville-based CodeTN, which encourages students to learn software design.

For the third consecutive year, a team from FHS took home the top prize in the organization’s regional competition, held earlier this school year.

“Their work ethic was like at the college level,” said FHS coach/sponsor Brandi Finchum, a computer science teacher in her first year leading the Coding Club, which has 25 members. “They worked a lot of hours to make sure everything was right and did a lot of group messaging.

“They were all just brilliant.”

Finchum won $5,000, which will be spent in her classroom.

On their own, each team was allowed to choose its topics. Others included study assistance and travel.

Teams worked at least 90 minutes a week on their projects. Finchum said most members also worked many hours outside of class.

Finchum said she was assisted by fellow teacher Judy Siebert, who teaches Coding 1 and Coding 2, and two “tech pros” from the community — Cindy Arnold and Daryl Houston.

“They helped with anything the students needed,” said Finchum, who has not yet decided on how the classroom money will be spent.

While the club has concluded its work and competitions for the current school year, it is always looking for new membership, she added.

Last November, CodeTN worked with area schools on setting a simultaneous coding record, which was recognized by the Guinness Book of World Records.