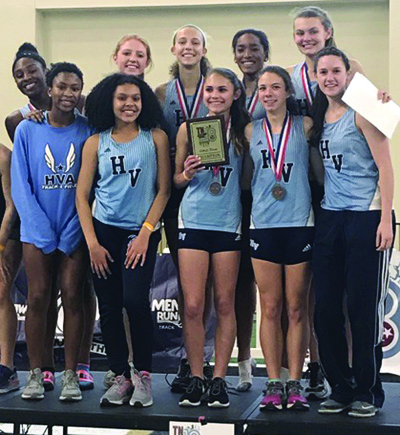 Three of these HVA athletes have four rankings in the top 12 nationally.

To qualify for this prestigious high school event featuring thousands of the nation’s top athletes Friday through Sunday, March 9-11, “You have to qualify based on your performances during indoor (events); they have to be at a certain level,” said Bryan Brown, HVA track & field head coach.

“To be an All-American you have to finish in the top six in your event,” he added.

“We won by more than I would have thought. We scored in a lot of events,” said Brown, who has now coached seven state champions at the school in girls and boys track & field and cross-country since 2010. “… We were pretty good all day across the board.”

The girls’ sprint medley relay foursome, which also has earned a trip to the Big Apple, are Bachmann, Gray, Timaya Ray and Dominique Romain (best time of 4:11.22; was not an event at state meet).

Romain, a freshman, also has qualified for the 60-dash for freshman at the New Balance nationals (7.85 seconds).

Other boys top finishers were Kenton Bachmann taking second in the 800 — having qualified for the New Balance with a No. 4 national rank (best time of 1:53.17).

Ray, a sophomore, placed second in the 200-dash.