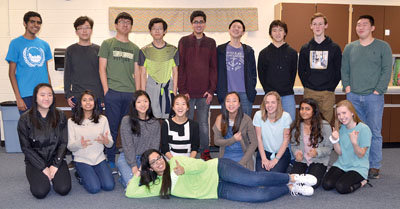 While the club normally is strong competitively and has sent many students to state and even national contests, this year it had more regional winners than ever before, all of whom will be attending the state HOSA competition March 26-28 in Chattanooga.

Club sponsor Kailey Ryan, who teaches health science at FHS, said club members “had a lot of self-motivation and relied on quite a bit of self-learning” to prepare for the regionals.

“They have to get 100 percent [on the individual categories] on their own.

“I am really proud of them, they are amazing students.”

“This year, everyone has really stepped up and put in a lot of work — months of work,” he said.

While most of the 90 club members don’t take classes taught by Ryan, she said, “Probably 99 percent of them will be going into the medical field of some kind.”

Ryan said last year two FHS students attended the national HOSA competition, and hopes are high that even more will be chosen to attend this year.

This year’s national competition will be held June 27-30 in Dallas, Texas.