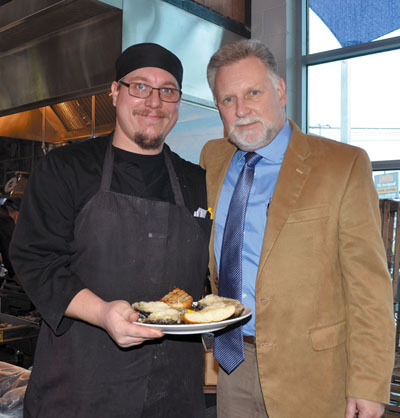 Chesapeake’s West Manager Todd Fleming, right, with chef David Puleo, who prepared a plate of smoked oysters.
In less than two months, the newest addition to the Copper Cellar family of restaurants already has made quite an impression on the West Knox County restaurant scene.

Chesapeake’s Restaurant and Banquet Center, 9630 Parkside Drive, has been busy day and night serving a clientele already familiar with its unique seafood creations, along with new customers entirely, since it opened in January.

The new location is slyly referred to by staff as “Chesapeake’s Miami,” to differentiate from the downtown Knoxville stalwart, which has helped define the Knoxville fine-dining experience since opening in 1983.

The restaurant is just the latest offering from the Copper Cellar Group restaurants, which also include Corner 16, Smoky Mountain Brewery, Calhoun’s, Cherokee Grill and Cappuccinos, among its 22 facilities throughout the region.

Chesapeake’s west location had been in the development phase for many years, said Copper Cellar Group marketing director Kelsey Headrick.

“We had been looking for a long time for this concept, and we didn’t want to rush [the process].”

“We have utilized every square inch,” said Todd Fleming, Chesapeake’s West’s general manager. “It is an open atmosphere, conducive to hosting a large quantity of people, yet does not feel crowded.

“It also has a very unique energy level, between the oversized lounge, a raw bar and the restaurant.

“It all works together and just gives it a great feel that makes it fun to come to work.”

Revolving doors open into a well-lit and appointed foyer leading into an enormous lounge area to the right or to an expansive dining space straight ahead. The décor is clean, sleek and modern yet has personal touches Chesapeake’s fans will recognize, such as beach-themed bric-a-brac and an array of mounted oversized salt- and fresh-water-caught fish.

The lounge has a raw bar and a custom 5-foot charcoal grill, offering the opportunity for on-site grilled oysters, which Fleming said, “no one else in town has.”

The restaurant also boasts a covered patio dining area, which features a floor-to-rooftop fireplace that, as the weather warms up, will have a mounted flat-screen TV set above the hearth.

Altogether, the restaurant comfortably can seat up to 350 — but that number does not include the event center, which can host parties up to 200 in number and features its own kitchen.

“It lends itself well for business meetings, weddings, receptions and parties,” Fleming said.

Putting on the finishing touches and getting Chesapeake’s West up and running “was incredible,” said Fleming, who has 42 years of restaurant experience behind him. “It was the smoothest opening I have ever experienced, and it has really been a good fit with our [Parkside Drive] neighbors.

“I don’t know who has been more excited — us or them.”

“There are a lot of businesses, eight to 10 hotels, realtors — and hospitals aren’t far away,” Fleming added. “We are centrally located, and there is easy access between the Interstate and Kingston Pike.

Fleming said there are future plans to provide courtesy shuttles for local hotels.

“We are putting together a market,” said Fleming, adding it will be

located on the side of the building, fronting Parkside Drive, with a separate entrance.

“We will be offering beer from our Smoky Mountain Brewery, along with meats and seafood. We have had a lot of requests [for that service].

“It will also serve as a central commissary, with a butcher shop and a bakery.”