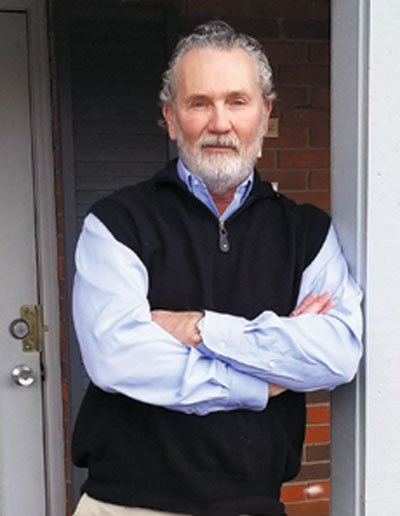 “I can’t believe I’ve been here this long, walking through that door for 30 years,” said Lensgraf, who grew up in Farragut and graduated from Farragut High School in 1973. “It’s crazy.”

With 30 years behind him, though, Lensgraf said he has no plans to retire.

“I’m in it,” he said. “I’m going to continue to run the show as long as I am physically able. I will be here.”

West Knox Chiropractic Group will celebrate its 30th anniversary with a Memories & Mimosas event from 7:30 to 1:30 p.m., Friday, March 16, in his office.

The open house will feature breakfast munchies, alcoholic and non-alcoholic mimosas and other beverages.

The laser, officially called a photobiomodulation laser, is new to the office, Lensgraf said.

“It’s Class 4, which is the most powerful, for treating musculoskeletal problems,” he added. “Basically, if [the problem] is an ‘itis’ — like arthritis, bursitis, tendonitis — [the laser] treats it. It also treats sinuses.”

However, the laser treatment is not covered by insurance. While it is U.S. Food and Drug Administration-cleared, the laser is not yet FDA-approved, Lensgraf said, explaining FDA approval could take about 10 years.

“When it gets to the approval level, [the insurance companies] deem that [treatment] non-experimental, so then insurance picks it up,” he added.

Lensgraf worked for his uncle in Knoxville for three years before hanging his own shingle and opening West Knox Chiropractic Group March 15, 1988. He is a third-generation chiropractor and the 22nd member of the Lensgraf family to become a chiropractor.

“Growing up in this profession with my grandfather and dad, and all that, I’m sure that was a huge influence,” Lensgraf said.

“There’s been a Lensgraf practicing in Knoxville since 1922,’ he said. ”That was my granddad [Arthur W. “Art” Lensgraf] and his seven brothers and one sister — all chiropractors. They were the first generation. My grandfather was an immigrant from Norway.”

Lensgraf spent his youth in Farragut, watching the changes in the community.

“I’ve been here since the third grade,” he said. “I’ve just enjoyed being in Farragut and seeing what a fluent community this has become.

“I remember when Farragut wasn’t a town. It was [known as] Concord,” Lensgraf added. “When I went to school here, we were called the Farragut Farmers back in the day by the Bearden students. It was all farmland.

“The only thing that was here when I was growing up was, where Costco is, there was an A & P grocery store and the Lone Star [gas station and country store],” he recalled while laughing, then added, “If you go over to the Town Hall and you go in its museum over there, that big star has 1,000 little dent marks where kids were throwing rocks at it.

Lensgraf also discussed how his profession changed, with the emergence of the insurance equality in 1978.

“If an orthopedic [physician], your physical therapist or your regular medical doctor performs procedures that we do, then we get equal pay from the insurance industry,” he said.

“Back in the day, chiropractic was not covered under insurance,” Lensgraf added.

Now, the chiropractic practice is licensed in all 50 states.

“We get Medicare re-imbursement from the federal government, and chiropractors are now working with the Veterans Administration,” he said.

His favorite memories revolve around “helping a bunch of people, seeing them come in, barely able to get out of their cars, to a few weeks later back in the game.”

Lensgraf shares the office with Dr. Wendell Ellis, who has been treating patients in the area since 1985, chiropractic assistants Dawn Bath and Amanda Whan, and massage therapists Melissa Derring and Tiffany Dalton.

Lensgraf is married to Paola Nielsen Lensgraf. He children are Clint, a construction engineer; Kasey, a registered nurse; a stepson, Skylar; and a stepdaughter, Giana. He also has a 1-year-old granddaughter, Lily Ann.