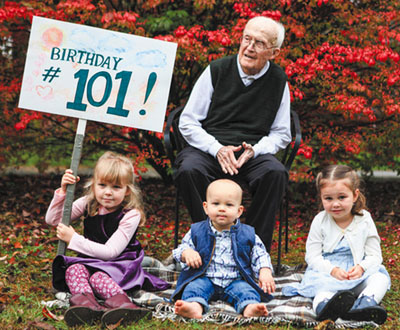 “I enjoy being alive … and active to a point,” he said and laughed.

“I just feel like it,” he said, smiling, and then added, “I guess I’m fortunate. I’ve always had people around me who were doing the same thing … living, eating and sleeping.”

While Johnson does not have any exercise regimen of which to speak, he walks more than a half-mile three or four times a week, daughter Martha Cottrell said.

“If all conditions are good, weather-wise and if he feels like it, he generally walks from our house, out the road, on the sidewalk, down to the corner of Boring Road, where the barn is, and a little way up the driveway [near the barn]. So, I’d say it’s a little over a half a mile down there and back,” she added.

“Sometimes he just walks part of that. Sometimes, we’ll go pick him up [on the trip back].”

Ed said he started taking the walks because “It’s just something to do and it’s free.”

“He’s definitely always been a healthy, vigorous person,” said Cottrell, the only child of Ed and the late Frances Smith Johnson.

As a boy, Ed, who grew up in South Knoxville, played baseball, basketball and even football. He took up golf in his 40s and played until his 90s.

“He nearly always walked [around the golf course],” Cottrell said of her father. “He didn’t ride a cart unless he went to a different golf course that required [players] to ride carts.”

She remembered her father working in the family’s nearly 2-acre yard.

“He always had a [vegetable] garden of his own in the field next door, and he always did outdoor work,” Cotrell said. “He basically took care of everything here on this property. This is the house that I grew up in.”

The land was given to Ed and Frances by Frances’ parents. Cottrell remembered watching her father push mow about an acre-and-a-half of the 2-acre lot and rake leaves.

“There were many more trees than there are now,” she recalled.

Cottrell also remembered her father encouraging her to be active.

“We joined Concord Pool when I was growing up,” she recalled. “When Fox Den first developed the golf course, I was given the opportunity to learn to play golf with the junior group there.”

She also played tennis with friends and worked outdoors.

“My mother did things outdoors, as well, but daddy was the one who mowed the grass,” Cottrell said. “We pitched in and helped with raking.”

However, Cottrell thinks the key to his longevity is his faith.

“He definitely has Christian faith. He’s a Christian man,” she said. “I think God’s just blessed him with good health.

“Up until about seven years ago, he didn’t take any medications at all and was very hesitant to take an aspirin for a headache.

“He’s always been [and still is] an early riser, early to bed,” Cottrell added. “Now, he does enjoy all kinds of foods. He has always enjoyed eating.”

Ed said he grew up with simple Southern cooking —meat, potatoes and vegetables — and he still enjoys “plain food.

“I guess when we were young, mother just prepared good food for us, and we ate good food at home — nothing fancy, just plain [meals] — but all of us, I think enjoyed eating,” he said.

“He enjoys a good breakfast and, really, three meals a day,” Cottrell said and laughed. “He’s never been a vegetarian or he’s never had limitations on his diet.”

While Ed enjoys sweets, she said, he does not eat anything to excess.

“He’s kind of a moderation person,” Cottrell said of her father. She added he also is a quiet, easy-going man who “doesn’t worry and fret about things that a lot of people get stomach aches about.”

And, “he’s never been an alcohol drinker at all.”

However, “I never knew him as a smoker, so he hadn’t smoked for 60-plus years,” Cottrell said.

“When we were in the service, boys smoked, and we sort of got through that — or I did — then didn’t smoke and thought it was stupid and just quit,” Ed said.

He was born Nov. 5, 1916, to Edward Lee and May Doyle Johnson and was reared near Fort Dickerson in South Knoxville. He was the youngest of three boys, which included Denman, who was nine years older than Ed, and Toney Johnson, who was 2 when his father died of an illness.

”I didn’t really know him,” Ed said about his father.

The Johnsons lived with family members, which included two aunts and May’s brother, Eb Doyle. May Johnson reared her three sons while working “some” at the courthouse, Johnson said.

He remembered his mother and Uncle Eb “had good voices,” singing in South Knoxville Baptist Church, and she and other female members of the household being good cooks.

Ed also remembered how his uncle stepped in as a role model.

“[Uncle Eb] was like a father to us,” Ed recalled.

For Ed, his uncle also was a model of Christian faith.

“They always went to church so my brothers and I grew up to go to church,” he said.

Other memories centered around play, such as when he and his friends visited the fire hall next door, playing baseball in a field on the hill at Fort Dickerson and building shacks on that same hill.

“We spent a lot of time, as boys, playing ball and everything in that area,” Ed said. “We had a nice place to have a ball field. It was nothing special, just a place to play as young people.”

He graduated from Young High School and subsequently served in the U.S. Army Infantry for three years during World War II, where he was in combat in Africa, Italy, Austria, France and Germany.

He later worked for Tennessee Valley Authority as an engineering aide in the Engineering Design Department for 37 years, until he retired in 1977.

Eamonn and his wife, Angela, have two children, Tristan, 2, and Adalyn, 3 months.

Lee and wife, Laura, have three children: Frances, 5, who was named after Martha’s mother; Polly, 3; and Robert, 17 months.