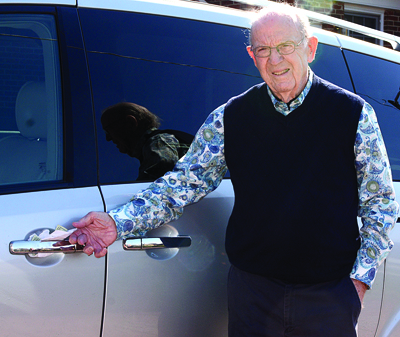 “I saw paper in the [driver’s side] handle. I wasn’t parked very good, so I said, ‘well, somebody has left me a note telling me to park my car right,’” said Fogarty, a retired World War II U.S. Army 11th Airborne combat corporal. “When I came out I guess it was about 8 o’clock; it was dark.”

Instead, it was an anonymous person going one step further with the message of “Thank you for your combat service.”

“When I grabbed it and picked it up, I saw the note and a $20 bill on top of it,” said Fogarty, former owner of Bill Fogarty’s Men’s Fashions in downtown Knoxville.

The note simply read, “Thank you for your service, XO (meaning ‘hugs and kisses’).”

“It shook me up — I was choked up a little bit,” Fogarty, a Fox Den Villas resident, said.

“Daddy’s a giver, and it chokes him up and it’s emotional for him that somebody would take the time to do that,” Cindy Maxfeldt, Fogarty’s daughter, said. “It’s because he’s not used to being a receiver. He’s so kind-hearted. Just a kind soul — and generous.”

“I was stationed in Kobe, Japan,” Fogarty said about one of his locations during his two years of service in 1945 and 1946.