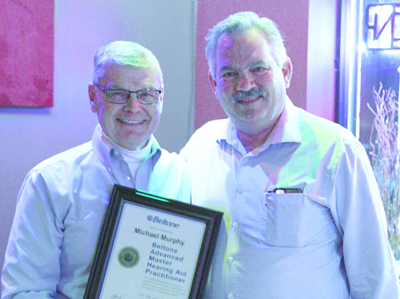 This national award, which came from Beltone’s corporate office in Glenview, Illinois, is given to hearing aid specialists who have achieved excellence in testing, dispensing and maintaining hearing technology, according to a press release.

“We are thrilled for Michael Murphy and the well-deserved national recognition he deserves,” said Perry Ebel, president of Beltone South, who presented the award. “Being able to help those who are hearing impaired is a great honor.”

“It is a blessing from the Lord that He has given me skills to be able to help people communicate with loved ones at home and work,” Murphy said, “and He has opened the doors of opportunity to be there for our patients.

“They are family,” added Murphy, who is licensed by National Board for Certification in Instruments and Science.

He administers tests to evaluate hearing and speech audiometry, then dispenses hearing aids and other communication devices as needed for Beltone South.

The award is “a recognition by my peers that I have been doing my best in working with people and addressing their needs in the most professional and caring way I can,” he said.

Murphy, the senior specialist for Beltone, serves patients at Beltone South’s office in Suite 102 of Renaissance | Farragut, 12744 Kingston Pike. He has been a hearing specialist for 17 years, starting in Harrisburg, Pennsylvania. “I’ve been working with Beltone since then,” he added.

“When I was doing undergraduate work, I started volunteering,” he recalled.

That led him to youth services and later to human services in the 1970s. When he moved to central Pennsylvania in 1990, he started working in sales for a number of years but wanted a change. “My wife came across an ad on Beltone,” he said.

Murphy sees his work with Beltone as a good opportunity to use his God-given skills to help patients, from seniors to younger people.

Through the years, Murphy has seen hearing loss as more than a communication problem; it is a health problem.

“It all comes together to make what we are doing, providing the very best health care,” Murphy added.