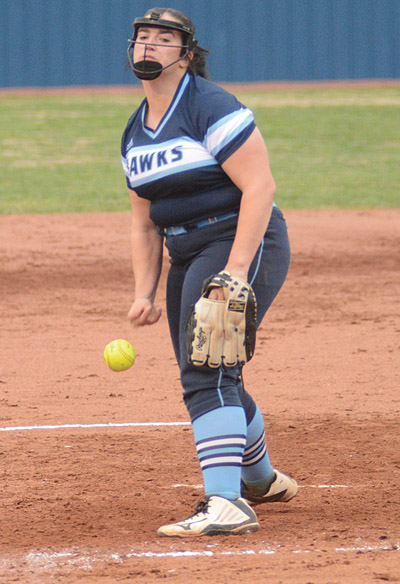 She was pleased to see her Lady Hawks outlast rival Farragut 5-3 before a packed house on a chilly and overcast early-spring afternoon at FHS’s Bellamy Field.

But she was far from content, simply because she knows there’s still plenty of softball remaining to be played.

“It’s really early,” Hickam-Cruze said after watching HVA break a 3-3 tie with a pair of runs in the top of the sixth inning. “This was really a gutsy effort by both teams.”

The Lady Hawks took a late 5-3 lead on a two-run single by third baseman Madi Lane with two outs. Lane’s hit knocked in Sydney Dukes, who led off the top of the sixth with a double, and Macy Beard. Beard was serving as a courtesy runner for junior pitcher Emalee McCord, who drew an intentional walk after Dukes reached base.

Then things got a little crazy.

Farragut senior center fielder and leadoff hitter Andrea Sarhatt reached on the first of three consecutive singles by the Lady Admirals. Sarhatt advanced to second when Devon Weller singled. Kelsie Tuggle then scalded a ball off of Grace Speanburgh’s glove to load the bases.

Speanburgh did record the final out of the contest when she caught a fly ball off the bat of Cameron Young, Farragut’s designated player. The game appeared to end earlier when Young lined a groundout to Lane, HVA’s third baseman.

But after the umpires conferred, the ball was ruled foul before McCord induced the game-ending pop fly.

Dukes, who had a big day at the plate, said the win was big for the Lady Hawks.

“This feels really good,” said Dukes, who went 2-for-4 with a two-run homer, a double, two runs batted in and a pair of runs scored. “This is the first time that we’ve beaten them without (former pitcher( Kaleigh (Wynne, who graduated in 2016). We wanted to prove that we could beat them without her and we did.

“This was a tough game and a tough battle. They give us a tough battle every time we play them. They really brought it today and you have to give them credit for that.”

“We came out and we jumped on them,” she said. “Then, they came back and tied it up, so you really have to give credit to [coach David Moore’s] team. Then, back to my team, I liked the way that we responded after they tied it up.”

The Lady Hawks, who scored all of their runs with two outs, took a 2-0 lead when Dukes blasted a two-run shot over the fence. Kayla Domon, who was hit by Lakyn Moore to start the game, also scored on the round-tripper.

McCord followed with a solo home run to make the score 3-0.

“That is one of the strengths of this team, that we can hit it out,” Hickam-Cruze said.

Farragut answered in the bottom of the frame. Young picked up an RBI when she reached on an error and drove in Sarhatt, who walked. Young and Weller (who singled) came home on a two-run triple by Bailey Myers.

Coach Moore said he was pleased with his team’s effort, despite the loss.

“This is a tough district and this is typical of the game when these teams get together,” he said. “It’s typical of any game in our district, really.

“You really have to give them credit. They jumped on us, but Lakyn settled down and threw well after the rocky start. This is a game of inches and we had balls going off gloves all over the place.”

Similar to her coach, Weller also said it was a tough game against the Lady Hawks.

“At first, this was pretty stressful but I knew we could come back once we scored our first run,” she said. “We definitely battled.”