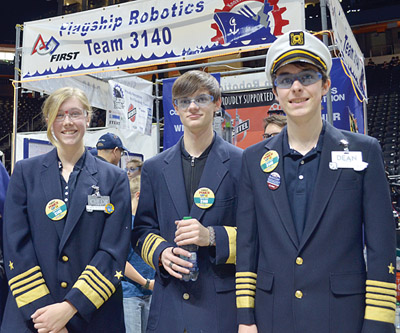 However, the team already had secured a berth to the World Championship Competition April 18-21 in Houston, Texas, by winning the Palmetto Regional earlier this month.

“We actually lost to our old alliance partner (at Smoky Mountain Regional), which is one of the better teams,” said Evan Gitto, Flagship strategy captain. “But we feel good about (the competition overall) and made one of our best records.”

The Flagship team also came away with the Smoky Mountain Regionals Quality Award Saturday, along with the Woody Flowers Award for mentor Eric Manneschmidt and the Dean’s List Award, which honored team member Patience Simes.

“The team won their quarter final, and lost in the semi-final to the winning team,” noted Jane Skinner, Flagship’s teacher-sponsor, who added the team “placed fourth overall.

“We are all just so excited to be able to return to Houston this year to compete in the (World)Championships … and are so proud of our students and their performance.

She said the team also was “glad to see these hard-working individuals (Manneschmidt and Simes)” were recognized during the awards portion of the event.

It caps a regular season topping out at Palmetto, where the Flagship team also won the Entrepreneurship Award and was runner-up to the Safety Award.

Smoky Mountain Regional pitted two alliances comprised of three teams each, which battled it out over the final day of this two-day event.

Flagship 3140 was among 51 teams from around the country competing.

Among other area teams, Webb School of Knoxville 1466 finished second in its alliance while chosen as a wild card winner to attend the World Championships.

“It feels great,” said Evan Davies, team captain and driver. “It was the best we had done in eight years.”

With its 1466 program, Webb has the distinction of having formed the first Robotics team in the Knox County area, which “has the highest concentration of robotics teams in the country,” team member Jonathan Seifried said.

“There are a lot of good schools in the area that really care about engineering. “

“We are really excited,” said Charlie Morton, who was a driver for the team’s robot. “This has been a great season. At first, we (were) afraid we had been overlooked — we were the second to last to be picked.

“But (it turned out) to be an excellent alliance to get onto.”

Webb was paired with teams 3489 from North Charleston, South Carolina, and 3959 from Somerville, Alabama, pitted against 4265 of Oak Ridge High School, 4306 of Franklin High School and 2614 of Morgantown, West Virginia.

Catholic made it to the quarterfinals Saturday, and HVA reached the semis.

The roHAWKtics had a disappointing finish, especially since it came away with the Chairman’s Award last year, and team captain Charlotte Whitmer noted a change in mentors along with a loss of its practice field as contributing factors.

“(But overall), I think we did really well, especially with everything we had to adapt to,” she said.

Each team designs, builds and programs a robot that meets qualifications and specifications set out by the FIRST program.

This year’s challenge was a “retro arcade game-themed challenge,” in which the alliances were “trapped” in an 8-bit video game and were required to move or “shoot” milk crates for points.

The weekend event brought hundreds of spectators to Thompson-Boling, including Jane Day Tiller, who was visiting the University of Tennessee campus with her daughter.

“We just stumbled on to this, and we have really enjoyed it,” she said.

Dan Howett, one of the event’s referees, made note that all participants are overall winners. “To quote the program founder, ‘every kid here can go pro,’” he said.

“To quote the program founder, ‘every kid here can go pro,’” Howett said. “You won’t see every basketball team member [going to college], but all of these kids here, they are going to college.”