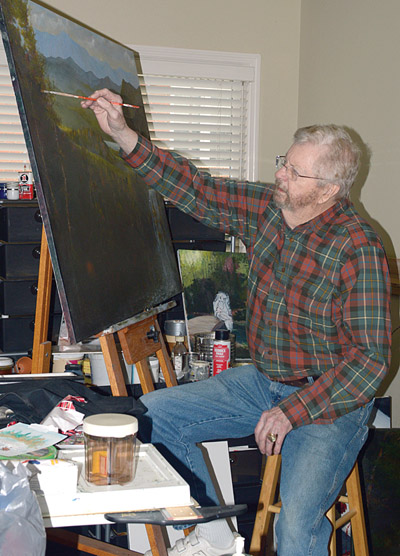 DeFord paints a landscape.
A meandering mountain stream, an impressionistic painting of mother and child and a still life of a Dogwood arrangement await visitors of Farragut Town Hall.

Farragut Arts Council presents the works of painter William “Dan” DeFord, featured artist for March and April. His exhibit, which accentuates his love for landscapes and heritage, is displayed in specially designed cases on the second floor of Farragut Town Hall, 11408 Municipal Center Drive.

He mostly uses oil and watercolor media in his paintings and gravitates toward subjects that include mountains, still life, flowers, buildings and places he and wife, Katherine, visited, such as Copenhagen, Yellowstone National Park, Moscow and Venice.

“I like things that are more natural to me,” the 82-year-old artist said. “I’m more of a realist-type painter. I like mountains; I like heritage-type paintings.

“I don’t necessarily like abstract work — I appreciate the work others do, but I don’t like doing it,” he added.

Additionally, only a few of his paintings will depict people.

“I’m not a portrait painter,” he said. However, a photograph of a Norris family taken when TVA moved the family from its home to build Norris Dam touched on his interest in heritage-related subjects.

“I was able to get a couple of photographs from TVA,” he said. “I have painted that family because it’s part of our heritage.”

“(Dean) said she saw some of my paintings, (which were hanging at the dentist’s office),” DeFord said. “Sandra got in touch with me and we went from there.”

Pam Ziegler, who also serves on the Arts Council, helped him set up his display.

His interest in art started when he was around 7 years old.

“I grew up [using] pencil and ink,” DeFord said. “I probably was always interested, in some degree, in art.”

When he was 6, DeFord remembered playing a part of Froggy in one of the “Our Gang” movies.

“They had a big audition in Raleigh, North Carolina, and I tried out and won that part,” he recalled.

DeFord, whose maternal side of his family came from “old” Concord, was born in Lenoir City.

“Our family is a very old Tennessee family,” he said.

DeFord’s family moved to North Carolina during the Great Depression.

“But, when (World War II) broke out, we moved back here in Tennessee because my dad had to go in the war,” he said.

While attending school in Lenoir City, DeFord remembered he started drawing everything he could see.

“I was really drawn to Indian ink,” he recalled. “I would see anything, and I would draw it. I just enjoyed doing it, I guess, and I kept doing that.”

DeFord joins many family members who are artists. For example, his uncle was a watercolorist.

“I always had that interest because of him,” DeFord said. “He made his own watercolors out of shoe polish and that kind of stuff. I was drawn to that medium from him.”

After graduating from high school, his family moved to Seattle, Washington, where his father worked for the postal service. During that time, DeFord painted with charcoal and pastel but quickly switched to oil.

After high school, he attended college in Seattle and Southern California, graduating with degrees in electrical engineering, math and physics.

Although he was a draftsman and later engineer with the federal government, finally retiring in 2010, he continued with his painting. While living in California, he met Katherine.

“My wife was born in New York but she was raised in California,” DeFord said. “She’s of German descent.

“She has really encouraged me in anything artsy because her folks really appreciated art of all forms,” he added.

“I did quite a bit of paintings in California, when we first married. I started doing more and more and more.”

DeFord moved back to Tennessee in 1971, living in Fox Den subdivision until 1994, when he moved to Knoxville.

He and Katherine have a son, Curtis; daughter, Brigette; two grandchildren, Jacob, 18, and Mia, 10; and a dog, Abby.

He does not sell his works. “It’s just something I like to do,” DeFord explained.

During each two-month period, works of an artist or group of artists are featured in Farragut Town Hall as part of the council’s Featured Artists exhibit.