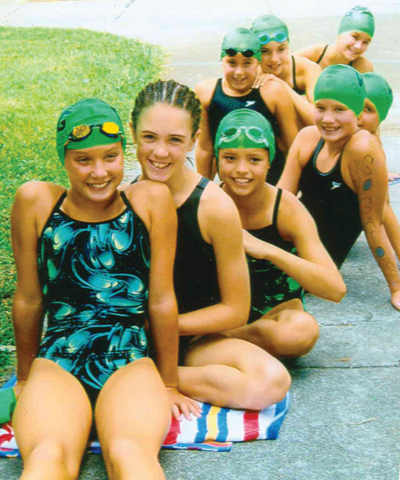 And comforting each other during tough times.

It doesn’t matter that these eight who graduated high school in either 2012 or 2013 — Ali Gilbertson, Martha Dinwiddie, Elyse Eilerman, Avery Anderson, CC Hermes, Ellie Osborne, Katherine Barker Carlson and Lauren Love — are scattered throughout Tennessee, the Southeast and even in California.

They all made it back to Knox County to celebrate Barker Carlson’s and Gilbertson Rawlins’ weddings in January and April, respectively.

“We have three weddings coming up in the fall,” Rawlins added about Hermes, Osborne and Anderson.

“We get together, I would say, about four or five times a year.”

Otherwise, the eight use social media and simple phone calls to stay in touch on a regular basis.

Beginning as elementary aged children, “(Coaches) Robin (Wells) and Anita (Dinwiddie) kind of created this community and it was our family for the summer,” said Rawlins, a 2013 Knoxville Catholic High School graduate.

“One of us was having issues getting along with their mom, and the rest of us would kind of be there for her,” said Martha Dinwiddie (KCHS Class of 2013), Anita’s daughter. “Be there for her when she was upset, but also be intermediaries between her and her mom.

“All of our moms have kind of been like each others’ moms.”

The team’s success with the eight core girls came despite “not being year-round swimmers,” Anita said.

As for their respective high school teams, “swimming took a back-seat for most of them, they did other sports,” Anita said. “But C.C. swam in high school (KCHS, Class of 2012).”

About the eight as swimmers, “We were all pretty fast and had, I guess, similar energy,” Martha said.

As for bonding, “We would do sleepovers after every swim meet — we just spent so much time together,” she said. “It was hard not to be such good friends. … We made sure we stayed really close.”