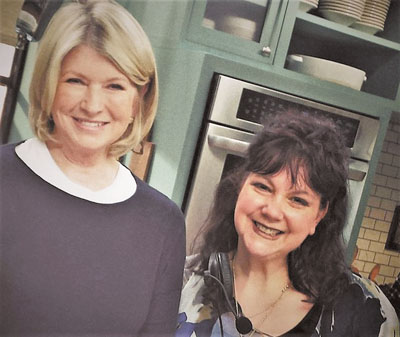 Christina Deyo worked with Martha Stewart during her pre-Academy career.
Fox Run resident Christina Deyo is on an educational mission disguised as fun and games.

Deyo opened her Cook n’ Craft Academy in Loudon in May, where she shares her extensive knowledge of both, linking the past, present and future in creative ways enjoyed by both children and adults.

“Children today are forgetting the true art of baking, cooking, knitting and crocheting,” said Deyo, who grew up learning those skills herself. “And, I don’t want it to be a lost art.”

Classes have included a “Victorian Tea Party,” “Back to School Slime Party,” “Bling it On” jewelry making; “Kids in the Kitchen;” “Bath Bomb and Soap Making;” along with birthday parties and summer day camp activities. Deyo also is planning for an upcoming after-school baking club that kicks off a four-week run starting Sept. 13.

While many of the classes are divided up into age groups, some are specifically designed to transcend the numbers.

“Families can come together, maybe for an hour or two, and make memories while learning to make dinner together for example,” said Deyo, who has her own experiences in that vein, having worked with her own six children on projects both inside and outside their home.

Deyo’s professional work naturally fell in line with her early passions when she began working in TV production. The New Jersey native’s first national show was with syndicated talk show host Sally Jessy Raphael in the 1980s. She then had the opportunity to work for both Martha Stewart and Rosie O’Donnell.

Deyo said Stewart’s love for crafting, gardening and cooking certainly spoke to her own interests, and working for the decorating maven and chef for almost a decade “was a great experience. (Stewart) said you have to learn something new every day or you aren’t living.”

“(Rosie) was very progressive,” Deyo recalled. “(As a mother herself) she offered daycare and was very attuned to the needs of working mothers.”

O’Donnell also recognized Deyo’s talents. “During a rehearsal one day, O’Donnell commented that Deyo ‘was better than the (on-screen) guests.’”

After O’Donnell decided to leave television behind, Deyo went on to co-host her own show, “Lighten Up,” on the Food Network, which lasted one season.

She said she still is grateful the network gave her a chance, even though, “I think (the show) was a little before (its) time,” as the program focused not only on food, but also on how viewers might feel about themselves or view life in general.

Her collective experiences made her even more sure that she wanted to find a way to impart her vast crafting and cooking skills. As her husband, Robert, neared retirement from law enforcement, they began to look ahead toward relocation opportunities. Family vacations in East Tennessee led the couple’s children to suggest moving here.

Relocating to Farragut was “like moving to Mayberry, but with all the modern amenities.” Deyo said. “In New Jersey we barely talked to our neighbors, but here, everyone is so friendly and the community is so family-oriented.”

Which fits in perfectly with Deyo’s long-term plans. It took a little time, but she and her husband were able to find a building in Loudon County to renovate and house her business.

“I love to share everything I know — everything I have learned,” Deyo said. “I thought it would be neat to have a crafting/cooking club, and now we have that. It’s like a clubhouse, and I get to do this, every week.

It is a true family affair, with Deyo’s children helping.

Classes are typically $20 to $25 each, with sibling discounts typically offered. “As a mom of six kids, I know classes can really end up being pricey if more than one child participates, so we try to offer (discounts),” she said.

To check out the offerings at Cook ‘n Craft Academy, visit its website at www.cookncraftacademy.com