Faris to be honored at Crafts & Ale Festival 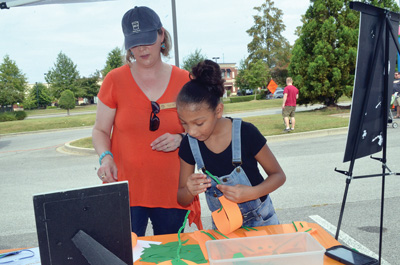 Julie Blaylock, Farragut West Knox Chamber of Commerce president/CEO, shows Armani Hall how to “make a pumpkin” during Zaxby’s Back to School Bash Saturday, Sept. 8, in advance of the Chamber’s inaugural Crafts & Ale Festival, set for Saturday, Oct. 13.
Farragut West Knox Chamber of Commerce is getting crafty for fall as it hosts its inaugural Crafts & Ale Festival.

Food from local restaurants, a Beer Garden and fine, juried crafts await festival-goers when they attend the event slated from 9 a.m. to 5 p.m., Saturday, Oct. 13, in West End Shopping Center off Kingston Pike in Farragut.

The Beer Garden will be open from noon to 5 p.m.

“We are thrilled to introduce the event,” said Julie Blaylock, FWKCC president/CEO. “It’s going to be in front of Goodwill, Echelon Bikes and Aurora Pools area of West End.”

The event came about because FWKCC Board of Directors wanted to try something new.

“Our beloved Fall 5-K, which we did for 23 years, was a wonderful event, but we just felt like it was time for a change,” Blaylock said.

“There are a lot of other 5Ks going on, and we wanted to think of something we could bring to Farragut (that is) unlike any other event currently held here,” she added.

“We came up with the idea of a crafts festival, and being that craft beer is extremely popular, we thought that it made sense to try to marry the two.

“It’s been about a year in trying to pull it all together,” Blaylock said. “We want to make this the best event it can be in its inaugural year.

“Our hope is that after this year, it will continue to grow and (we will be able) to make it a new fall tradition in Farragut,” she added.

The festival also is a memorial event to honor the late Faris Ashkar, a long-time Farragut resident and Chamber member who died in February 2018.

“We’re working with his family, hoping we’ll be able to have a booth that will showcase some of his work in the crafts area because he was a fine crafts artisan,” Blaylock said.

“It wasn’t so much that he was a member — he was a very engaged member,” she added

“When we told him about this new idea (for a festival) before he passed away, he was very excited about it. He was ready to be completely hands-on.”

Losing Faris was hard for the Chamber staff and its members, Blaylock recalled.

“Some of our members said, ‘When he walked into a room at a networking, it felt like somebody turned on a light,’” she said. “His warmth and his care just walked ahead of him everywhere he went.”

The craft portion of the festival, which is free, will be open to everybody — from 9 a.m. to 5 p.m.,, and families are encouraged to attend.

“There’s something for everybody,” Blaylock said.

Along with crafters, there will be food for sale through food truck vendors.

On the other side of festival area, the Chamber will have a European-style beer garden, featuring 11 brewers as of early October.

“We wanted to focus on ... breweries that are relatively new or up-and-coming, so we’ve got a really excellent mix,” Blaylock said.

Guests can purchase beer tickets at the festival. For a 12-ounce portion, a ticket is $5.

“Or, if they are a beer connoisseurs and want to taste everything, they can buy an Admiral’s Tasting Pass for $40,” she said. “That will get them samples of whatever beers they want to try from whichever brewery they want to visit.”

Tickets are available in advance by going to www.craftsandale.com, where the Admiral’s Tasting Pass can be purchased for $35.

“We’re also doing a giveaway on the website to give away tastingpasses,” Blaylock said.

The Chamber still is accepting applications for vendors for a $25 fee. To apply, visit FWKCC online at www.craftsandale.com and click link “Become a vendor.”