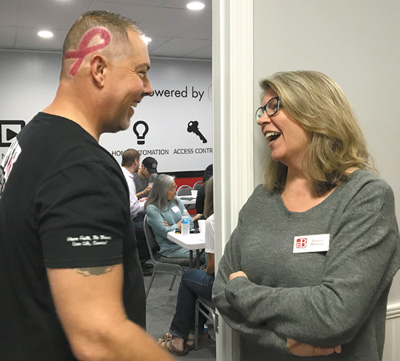 Scott Brockamp, left, co-owner of His Security, is wearing his heart on his head, so to speak, during the Knoxville area’s “Real Men Wear Pink” ongoing campaign. He is pictured with Darla Berdal from a Farragut West Knox Chamber of Commerce networking event His Security hosted last week. Brockamp is in line to be the top fund-raiser for RMWP for the second year running, and his unique hair statement is just one way he has been spreading awareness and raising money for the American Cancer Society.
Scott Brockamp of His Security is literally using his head to raise awareness and funding for the ongoing “Real Men Wear Pink” campaign to fight breast cancer.

He is hard to miss with his close-cropped hair revealing a large pink ribbon, an insignia showing his support of not only raising funds, but also serving as an ambassador for the two-month long drive that wraps up Oct. 31.

It is Brockamp’s second year taking part in RMWP, and he is one of 14 men from the Knox County area who are part of the campaign. He raised $5,000 last year, making him the top fund-raiser for the Knoxville group, and set a $10,000 goal this year, which was already 75 percent met as of the end of September.

His eye-catching haircut is a promise he made if a fundraising goal was meet early in the campaign.

“We had a challenge this year in which, if we raised $2,500 by Labor Day, I would have ribbons cut into my hair and painted pink to the end of October,” Brockamp said. “And, well the money was raised, so I have a cool haircut, but the stories that have been shared with me have just fueled my passion to raise a lot of money for the cause.

“I am most excited to use my numerous and varied connections within my industry to help raise additional money for and awareness of the American Cancer Society and it mission,” he stated on his fundraising Facebook page. “Being the father of two girls, statistically I stand a good chance of dealing with some form of cancer either with my daughters or my wife. I honestly don’t think that there is anyone in the world who has not been touched by some form of cancer. To be able to be involved in the Real Men Wear Pink Campaign to bring awareness and provide support for those affected and in need, is a blessing in itself.”

Lea Bradley, community delopment manager with the American Cancer Society, and program leader for the majority of breast cancer awareness campaigns and fund-raisers, said this is the fourth year for the Knoxville area to take part in RMWP.

“There is a real value in men supporting the ACS in this way,” she said. “Breast cancer can affect men (personally), and they also love people who get breast cancer. It really opens the door that other activities don’t open, and gets companies involved that otherwise (might not).”

“Even though the guys compete, they are also very supportive of each other’s efforts to bring more donations to the cause,” said Christine Dean, marketing and business development manager with His Security, who added she is “the cheerleader for all things RMWP” and Brockamp’s events coordinator. “Scott is encouraging other RMWP men to, as a group, break the ACS’s Knoxville record for RMWP this year.”

Dean said most donations have come through events His Security has hosted.

Two more fund-raisers at Dickey’s are planned for Tuesday, Oct. 9 and Oct 30, and two other events are upcoming: A Real Men Do Yoga Event at Real Hot Yoga Sunday, Oct. 14, and a special dinner and auction Thursday, Oct. 25 at Kitchen 919.

“As you can see we believe it takes a community of businesses to work together to support those that need help the most,” Dean said.

For more information on donating to Brockamp’s campaign, visit his Facebook page, Scott Wears Pink, or online at www.scottwearspink.com.