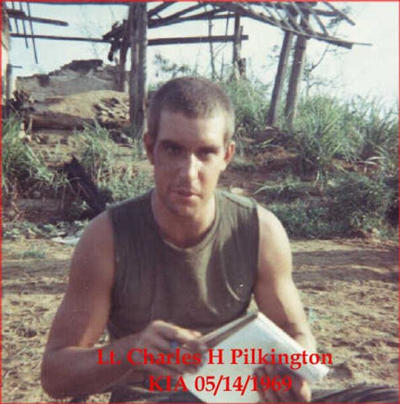 2nd Lt. Charles “Chip” Pilkington in Vietnam
Charles “Chip” Pilkington Jr. spent many summers lifeguarding at Concord Pool, tending the grounds Concord Park and — in what has become a rite of passage for many Farragut and West Knox Countians — jumping off the Northshore Road bridge, which fittingly has been re-named in honor of this Vietnam veteran who sacrificed his life in combat nearly 50 years ago.

“He was a heck of a good Marine,” said Farragut resident Nic Arning, a long-time family friend who instigated the renaming of “2nd Lt. Charles H. “Chip” Pilkington Jr. USMC Memorial Bridge” during a special

“I don’t see this as a ceremony of sadness, but of celebration and joy in naming this bridge after my brother,” Len Pilkington said. “I believe (his) spirit is here with us today, and he’s grinning like a coot and is glad we are here.”

Chip Pilkington was born and raised in the Bearden community, graduating from Bearden High School in 1964, and living on the east end of Northshore Drive, next door to Sacred Heart Catholic Church. “He played, fished and water skied on Fort Loudoun Lake,” Len Pilkington wrote in a letter supporting the bridge re-naming. “Growing up our ‘swimming pool’ was Concord Park or Fort Loudoun Lake.

“West Knoxville and Concord were his ‘stomping grounds,” Pilkington continued. “I cannot tell you the number of times that Chip, his friends and little brother have jumped and dived, illegally I’m sure, off those two concrete bridges over the lake at Concord. That is why we would love to see his name on one of them.”

Chip enlisted in the Marines as a University of Tennessee student, and after graduating in 1968 moved to Quantico, Virginia, with his new bride, Janie, to attend Officers Candidate School. He was deployed to Vietnam in February, 1969, where he served as platoon commander with Company D., 1st Battalion. Chip was killed in action less than three months later on May 14.

“His unit saw many engagements with in the enemy during his time ‘in country,’ and he always led them from the front, positioning himself where the hottest action was to direct and encourage his men,” his brother said.

Chip’s influence has never left Arning. While driving over the bridge one day he began formulating the plan to have him memorialized where they had spent so many happy hours of youth.

“Chip will always be 23 to me,” Arning said. “... If people drive on this road and over this bridge, and see the road sign and maybe call the county and ask about him, he will never be forgotten.”