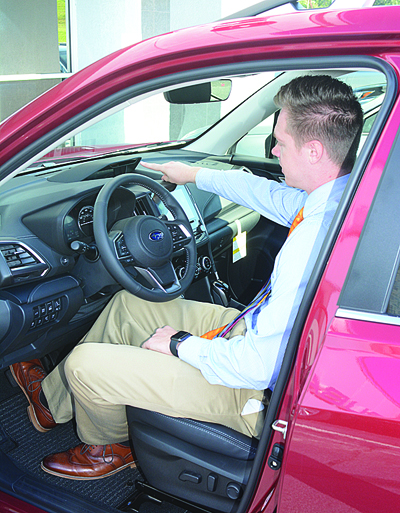 Kevin Harris, Grayson Hyundai Subaru delivery specialist and the dealer’s technology expert, points out what he said is groundbreaking technology: the DriverFocus Distraction Mitigation System
Inspired by a teacher at Farragut High School to pursue a career involving technology, Kevin Harris (FHS Class of 2011) has used his skills as a technology point-person at Grayson Hyundai Subaru to outline its groundbreaking — and potentially life-saving — DriverFocus Distraction Mitigation System in all of its 2019 Subaru Forester Touring compact SUV models.

Its safety features include sounding an alarm whenever the driver’s eyes aren’t directed ahead at traffic for more than a few seconds, said Harris, Grayson delivery specialist and the dealer’s technology expert, during an “SUV For All You Love Launch Celebration” at the dealership, 8729 Kingston Pike, Friday morning, Oct. 5.

“It has an infrared scanner built into the dashboard … it will actually scan your eyes,” Harris added “… If the driver gets distracted for any reason; if you look to the left or right for more than three seconds, it will alert you with an audible sound and notify you to watch the road.

“It’s going to help out with distracted driving to keep everybody more focused on the road.”

The 2019 Forester Touring model’s DFDM System is the only compact SUV in the world “to offer an advanced technology safety system of this kind,” a Grayson press release stated and Harris confirmed.

The DFDM System also identifies “who’s driving. And then, whomever is driving it will actually rearrange some (pre-programmed) settings of the car,” Harris said. “It can change the temperature of the car, the seating position.”

Having first arrived at Grayson last week, all 2019 Forester Touring models include the DFDM System as standard packaging, with the model’s sticker price “starting around $36,000,” Harris said.

A related warning system, Eyesight Driver Assistance Technology, was introduced “a few years ago” to prevent collisions with “lane departure warnings, so if you drift out of your lane it will correct the steering for you,” Harris said, adding that while this technology now is standard in many makes and models, Grayson Subaru was “among the first” to unveil it.

Having been at Grayson about 18 months, Harris also leads the dealership’s new car review, where new Subaru owners are invited back to the dealership between one and two weeks after their purchase to discuss and ask questions about their new vehicle. This service is free of charge and includes a $25 gas voucher.