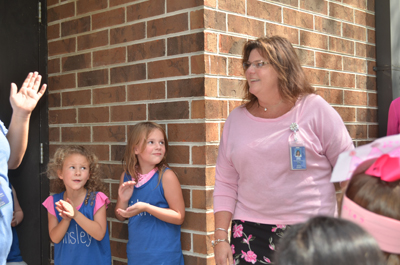 Farragut Primary School Principal Gina Byrd became emotional as her students and staff greeted her last Friday as part of a surprise celebration that honored her 30 years of service to education.

Beloved Farragut Primary School principal Gina Byrd was bombarded with signs and well-wishes Friday, Oct. 5, at the school as she was treated to a special surprise celebration, which was two months in the making.

Stealthy students and teachers waited in the Kindergarten hallway for Byrd to appear following an off-site meeting. Stunned, she was led down the hall then outside, where the rest of the nearly 1,200 pupils enthusiastically welcomed her along the sidewalk and fronting the lower portion of the building.

Students held signs, proudly proclaiming their love and enthusiasm for Byrd, who has been at the school since 2009, when she was named assistant principal two years prior to taking the reigns from retiring principal Julia Craze.

Still seemingly puzzled by the outpouring, all was quickly revealed to Byrd during an assembly in the school’s gymnasium, where a list of dignitaries, family members and supportive former and present staff members waited to honor Byrd’s three decades of service to education.

“As a community, Farragut comes together in a variety of ways, and today you came together to honor our leader and our friend, Mrs. Byrd,” said FPS music teacher Teresa Ryder, who was first to speak. “Today, we are honoring you, your work and your family.”

The special commemoration was spearheaded by the FPS PTA and especially its president, Wendy Stiles, and Ryder credited the “organization and hard ‘behind the scenes’ work’” that pulled off the surprise commemoration and “in getting (Byrd) here today.”

“She is a great leader and gives all she has for you,” Zachary said to the student and adult crowd in the gymnasium. “She loves you guys and wants what is best for you.”

“This is just a way to thank you,” Stiles said during the program. “She gives so much. She is always the first to arrive, and often, is the last to leave.

“It is your action that inspires others to do more, and to be more,” she added.

Stiles also presented a special award from past, present and future PTA staff.

Also in on the surprise was Byrd’s husband, Russell, daughters, Sarah and Hannah, her mother-in-law, Jerilyn, and her predecessor, Craze, whom Byrd credited with being a staunch mentor.

“I am the luckiest person, and it is all of you who should be honored,” she added.

“I think the surprise went better than expected — and she was really taken aback,” Stiles said after the event.

“Gina Byrd is very unique. She’s impactful, she’s innovating, she’s humble and she’s kind. She knows every child’s name, and parents and teachers love working for her,” she added.