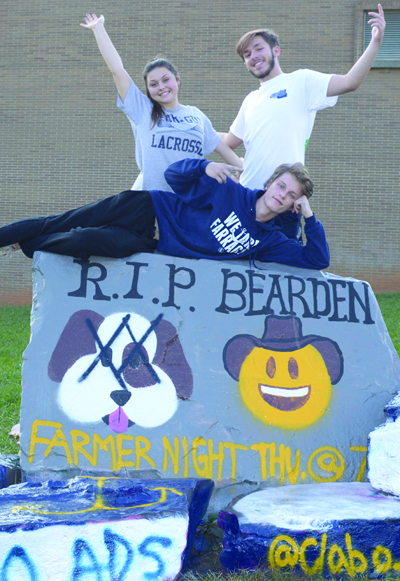 The Sunday before every varsity football game this year, student section leaders Hunter Owens, Lindsay Hinkle, Alex French and Alec Nussbaum paint the rock in front of the gymnasium.

Sunday, Oct. 7, they painted the rock in preparation for the annual rivalry game versus Bearden, which starts at 7 p.m., Thursday, Oct. 11, at BHS. This week’s theme is “Farmer Night at Bearden.”

“The Bearden game is always ‘Farmer Night’ because they used to call us the Farragut Farmers back when it was all rural over here, so we play into that concept and we all dress as farmers,” French said.

“And, we have Black Out for Hardin Valley,” he added.

Overall, “It’s also a great way to unify the students because everybody probably owns a black shirt or pants, so people can go all out for it,” French said.

“After that, we have the playoffs, so we have to think of

some more themes for that,” he added.

While the rock has been at FHS for two school years, French

said this year is the first time

it has been used to promote games.

“The Rock was put in about two years ago, and a lot of other schools do it as a tradition, where they will paint the rocks to promote what’s going on in the school,” Owens said. “So when we were chosen to be leaders of the student section, we thought it would be a good opportunity to promote the games.

“People before us had been painting it, but it hasn’t been a collective, organized effort like it’s been this year,” French said.

“Anybody can come up and paint this rock,” Owens said. “We saw it as a great opportunity to make this something special, promote the student athletes here and get people to come out to the games.”

“All the students who come out to the game are compressed into one little section, and we’re the ones who rally them and get them riled and promote school spirit,” Owens said. “They saw us at the game and saw we had a lot of school spirit and care a lot about the school,” he said. “They decided to put in our hands to carry it on for this year.”

“Really, we were looking for a good way to get more people to come to the games because last year, there weren’t a lot of people there,” French said. “We decided painting the rock would get everybody there because when they pull up to the school in the morning, they would see (the rock).

“We’re not just football either,” he said. “When basketball season comes around, we’ll be in charge of the basketball student section,” he said.

“We’re just out here trying to support our student athletes as much as possible because we really care about them and they really are great,” French said.

The rock design before each game is different, reflecting the upcoming opponent.

“At the beginning of the season, we all met, looked at the schedule and we planned them out game by game,” French said. “Every Sunday we come and we paint the rock for the following game,” he said.

Lindsay, the designer, said Saturday night she drew out some sketches for the game against Bearden

“Then I sent (those sketches) to (the other leaders) and had them vote on it,” she said. “Usually, though, I just come do it. I don’t really have a plan for it.”

It takes at least an hour to paint the rock, French said.

But, it could take up to an hour and a half to two hours, Lindsay added.

“She does most of the work,” Owens said about Hinkle. “She’s really good at the detail and artwork.”

Students and faculty approach the student leaders with feedback on the rock art.

“They talk to us,” French said about his classmates. “We go to school with them, so it’s easy to receive the complements they give us.

“They just walk down the hallway and say, ‘Hey, doing a great job,’ he said. “We also get recognition on some High School Prep Pages. Like Five Star Preps, we’re up for Student Section of the Week, and there’s a big vote going on for that.”

“Our principal, after the first two games of the season, said it was the best student section he had ever seen,” Owens said. “And, we had a couple teachers who have taught here a couple years, and they said (the section) is the loudest it’s ever been. It’s big compliments to us. It just feels great.”

And, the students are having a great time, he added.

“They are out there, showing their support, screaming as loud as they can and interacting with us,” Owens said.