Arapakos ‘Connects the Dots’ to Jesus 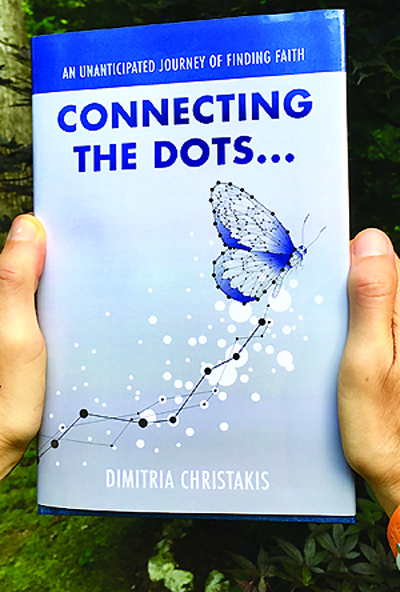 A Farragut High School teacher has undergone such a spiritual transformation that she has not only written a book about her late-in-life experience, but also symbolically adopted a new name.

Anna Arapakos, who has taught Russian and English at FHS for more than 25 years, has written “Connecting the Dots” under the pen name Dimitria Christakis. It details her own spiritual journey, mainly covering the first four years following her conversion to Christianity.

“There is no book like this anywhere,” she said. “It is all about the process of becoming a Christian and what that process looks like.”

Arapakos said she herself could have benefitted from such a book.

“I had only heard about how many come to Christ, but not the process for the time immediately after.”

“It did not start out as being a ‘come to Jesus book,’” she explained, instead describing it as more of a journal at first.

But she began to realize sharing her own experiences could, in fact, help others.

“I worked on it for three years, which is as long as Christ was teaching,” she said, adding that it was her intention to stop at that point.

“But then I went through some trials and tribulations of my own, and I wanted to share that my experiences had not been all roses.”

Arapakos said although she had made what she realized later was just a superficial commitment to God in 2004, she did not made a real conversion until 2013, one month before her 50th birthday.

“I began going to a church where the truth was being spoken with passion, zeal and intelligence, and I couldn’t get it off my mind.”

She said a friendship that blossomed with the church pastor clarified what she needed.

“For me, I was always seeking, and had a hunger for it. People are afraid to talk about God, but it is what they are hungry for.”

Arapakos said her book is one way to help others in their journey, although she realizes she can only offer her own experiences up for consideration.

“It is not on me to bring people to Christ — it is up to God and Jesus,” she said, but acknowledged it could be a catalyst for some. “If the Holy Spirit is involved the magic will happen and a life will be changed, although you may never know it.”

Arapakos said her own life has completely transformed over the last five years. “I am a living walking miracle,” she said. “It is still me, but it is me with Him, too. It has made me more patient and compassionate. I see the bigger picture now, and it is so much more than I could have ever imagined.”

As for writing the book under a new name, Arapakos likened it to the conversion experience of Paul, who was formerly known as Saul before he followed Jesus and authored much of the New Testament. “It is symbolic of coming to Christ,” she said. “Also, I wanted very much to take the focus off of me and put it on Him.”

Her book was released in August and is available through Amazon and at Barnes and Noble Booksellers.

She will sell and sign her book in person at Barnes and Noble in Bearden from 1 to 3 p.m., this Saturday, Oct. 13, adding that 90 percent of proceeds will be donated.