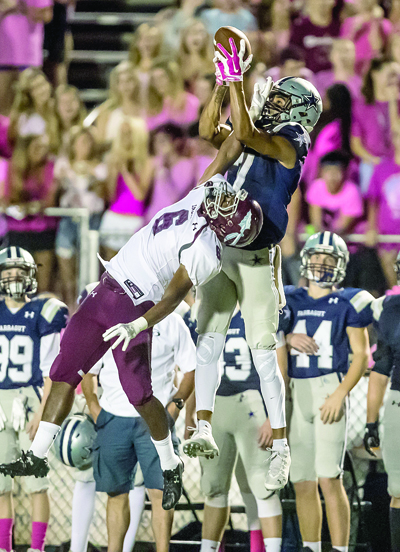 Jaden Gibbs (blue), Farragut senior receiver, goes high above a Kingsport Dobyns-Bennett defensive back to haul in this long pass at FHS’s Bill Clabo Field Friday night, Oct. 5. The Admirals won 42-20.
When Bearden and Farragut tangle on the gridiron the game is undoubtedly special simply because the contest is for Kingston Pike bragging rights.

In 2018, the game will have a bigger impact than usual as both the Bulldogs and Admirals have aspirations for a Region 1-6A championship. And the winner of this tilt will have a leg up on the competition, which includes Hardin Valley Academy and Science Hill.

With the Hawks stumbling against the Hilltoppers at home in a 17-3 loss last week, this game could loom even larger.

“If I’m reading the standings correctly, if Farragut wins this game, they pretty much assure themselves the region championship mathematically,” said BHS head coach Morgan Shinlever, who is seeking his first victory against the Admirals (8-0 overall, 4-0 in Region 1-6A). “If we win, we still control our own destiny.”

The Bulldogs (6-1, 2-1) enter the game coming off an open date while FHS had a short week of preparation after routing Kingsport Dobyns-Bennett 42-20 at FHS Friday night, Oct. 5.

“We have a short week and we played a very physical team in Kingsport,” FHS head coach Eddie Courtney said.

“The Bearden-Farragut game is everything that’s great about high school football,” Shinlever said. “It’s big for the fans and the students.”

“It will be special for me because it will be the first time that I’ve ever gotten to play in a Farragut-Bearden game,” said Kyle Carter, Admirals senior running back who transferred to Farragut as a sophomore. “Last year I was hurt and during my sophomore year I was ineligible.

“It’s a big game but we have to approach it like it’s just another game,” he added. “We can’t afford to get caught up in all the hype.”

Bearden junior quarterback Collin Ironside agreed. “It’s a big game. It’s going to be on TV and there’s going to be a lot of people there,” he said. “But we have to play the game. We can’t worry about what the people in the stands are doing.”

“It’s a big game for both teams because Farragut can pretty much win the region if they win. But if we beat Farragut and win out, we can win the region.”