FIS fourth-grader one of 64 selected for American Ninja Warrior Jr. 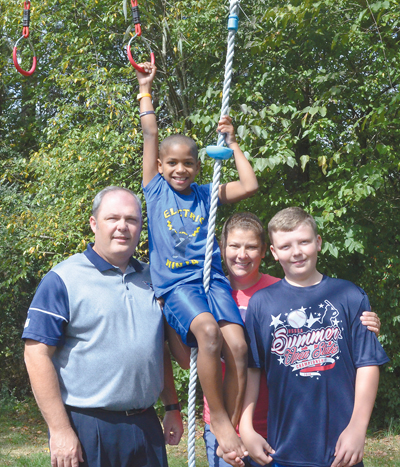 Enoch Jones spends a lot of time in his backyard, where he practices on American Ninja Warrior trademarked equipment installed by his father, Dr. Paul Jones, left. Also supporting Enoch’s growing skills set are his mother, April, and his older brother, Parker.
A Farragut Intermediate School fourth-grader is putting his Ninja skills on the line on a newly-formed nationally-broadcast reality show.

Nine-year-old Enoch Jones was selected from more than 5,000 applicants to compete on American Ninja Warrior Jr. earlier this year, and traveled with his family to Los Angeles this summer, where the show was filmed.

The program is a spin-off of the wildly popular NBC show American Ninja Warrior, which in recent years has featured Knoxville-area athletes Grant McCartney and Mike Wright.

The Junior edition’s episodes began its 20-episode weekly broadcast this past Saturday, Oct. 13, on the Universal Kids Network (Channel 325 on TDS). However, Enoch’s parents, Dr. Paul and April Jones, have not yet been informed when his episode will run.

It’s a new world for the Jones family, which also includes older

Enoch, however, was “never big on organized sports,” April said.

The couple attested Enoch has always been “active,” and he has taken gymnastic and other lessons at Summit Sports Training Center in Lenoir City.

But this relatively quick immersion into the ninja world took the family by surprise.

“It just never occurred to us that there would be this kind of competition,” April said.

They found out about the show through Summit Sports Training Center owner Matt Guldan, but it was up to the Joneses as to whether to enter Enoch in the contest.

Despite the lengthy and involved application process — which included about 15 minutes of taped video and two hours on line — the family took the plunge and submitted Enoch for consideration.

Of the 64 youngsters selected in three different age brackets, Enoch was the only one from Knox County who made the cut.

He trained with Guldan as much as possible before the trip, then once on-site, worked with coaches affiliated with the show.

Paul Jones said the competition differed in format from the senior version in that the children were pitted against each other, rather than just individuals against a clock.

“It was much harder and more stressful (under those circumstances),” he said, and added that finding out many of the other competitors had trained extensively and competed in other Ninja-style events added to the stress.

While the Joneses cannot reveal how Enoch fared, they both said they thought he did “really well,” especially for someone “who had never competed before.”

“It was really cool,” Enoch said of the experience. Even though the family was required to be

|onsite for one pre-production

day and two days of filming,

When asked if he felt like he was “the best one out there,” Enoch replied, “Almost.”

“He’s really not super competitive,” his father said. “It is more about having fun, and he is very good at it.

Paul said he realized early on Enoch demonstrated a keen affinity for the sport of “free running.”

“He could just run without stopping and go over or across any obstacle,” Paul said. “He was, and is, always climbing on anything that’s near him.”

They said one of his favorite activities is to “leap frog” over the enormous red concrete balls in front of Target stores, and his mother recalled a time when he scaled the underside of a set of bleachers at a local school.

“It has been scary at times,” April said of her son’s innate desire to conquer the obstacles he encounters.

“But he has never gotten hurt,” Paul said.

They are feeling their way along the Ninja route and are not sure where the next steps might lead. Since the American Ninja Warrior Jr. experience, Enoch also competed in his first local Ninja event in Atlanta, in which he placed third and qualified for the next level of competition.

The Joneses are just glad Enoch is enjoying himself, and his newfound skill set, and don’t want to force anything on him to change that.

“He is really good,” Paul said. “We want to push him enough to understand his potential — but not too much.”