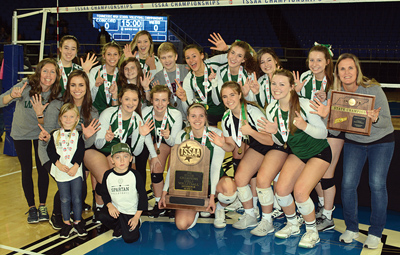 Under her leadership, the Lady Spartans have been to the Division II-A State Championship match seven times — and have won the last six state crowns.

Hames’ daughter, Pepperdine commitment Kayleigh Hames, had 27 kills and 17 digs and was named Most Valuable Player of the championship match.

“This is just amazing,” Kayleigh said. “We have an awesome coach and all the girls are awesome. Just winning this last one, making history, was the cherry on top.”

Haley Jenkins had 41 assists and 12 digs for the Spartans.

A freshman-laden Concord team made its second consecutive appearance in the Division II-A State Tournament, also reaching the Division I Class A Tournament twice in its brief volleyball history.

Freshman Annabelle Sulish had 21 kills and nine digs for CCS. Emma Meyer had 25 assists and 11 digs. “It’s our first year making it to the championship, so it’s just an amazing experience,” Sulish said.

“It’s amazing to experience all the way around.”