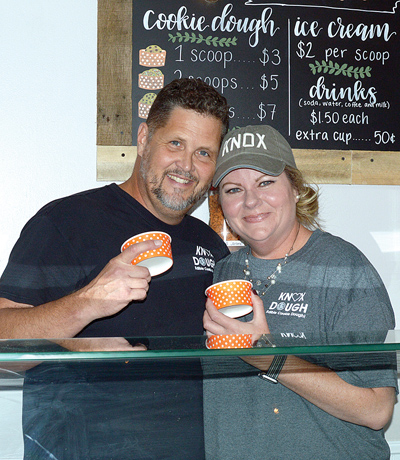 They make and sell frozen edible cookie dough, and now the Curtises have branched out from their cookie dough truck and opened a brick-and-mortar store, Knox Dough, 10551 Kingston Pike behind Biker’s Rags, Monday, Oct. 15.

“We’re so blessed,” Janet said. “It’s exactly what we wanted to do.”

“We’ve been operating a cookie dough truck, the same type thing, for a year,” Steve said. “This is our first store. We plan on opening many more, Lord willing.”

The cookie dough concept came easily to the Curtises.

“We’ve got six kids between us, and every time my wife would make cookies, they would steal the cookie dough, and she would never be able to make the cookies,” he said. “This (concept) is actually pretty popular in other parts of the country — California and New York.

While Steve said all cookie dough is edible, he said, “What we do makes it safe.”

The Curtises do not use eggs and they special use heat-treated flour.

“And, she’s got her own secret recipe for the business,” Steve added.

So with that popularity, the Curtises decided to open a storefront.

“We can’t be everywhere at once (with the truck), so now we got a central location, and we’ve got our cookie dough truck out and about,” Steve said.

The couple also sells store-made waffle cones and Mayfield ice cream — but only at the store.

“We make the cones ourselves,” he said. “We don’t order them.”

Steve said they chose the Kingston Pike site because of the location and the landlord.

Knox Dough is open from noon to 8 p.m., Monday through Thursday, and from noon to 9 p.m., Friday and Saturday. It is closed Sundays.