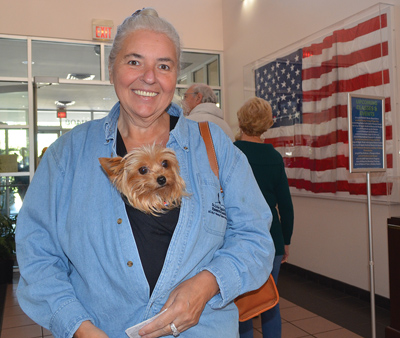 Barbara Mahar took “Bella” with her to vote last Friday, Oct. 19, at Farragut Town Hall. Mahar was one of more than 6,000 who cast their ballots at Town Hall last week during the first four days of early voting, which runs through Thursday, Nov. 1.
More than 6,000 registered voters cast ballots at Farragut Town Hall last week, taking part in an early voting frenzy normally seen only during presidential election years, according to officials.

They joined record numbers of Knox County voters who rushed to the polls last week when early voting kicked off Wednesday, Oct. 17.

Chris Davis, assistant administrator of elections for the Knox County Election Commission, confirmed the first day of early voting, Oct. 17, did set a county record with 33,596 early voters who had cast ballots county-wide by the time the polls closed Saturday afternoon.

He said there has been much speculation about why the numbers are so high, including a pro-Democrat “Blue Wave,” encouragement from country/pop star Taylor Swift and potential backlash over now U.S. Supreme Court Justice Brett Kavanaugh’s confirmation hearings, but he suggested a simpler reason might be at play.

“I believe one of the biggest reasons we are seeing this interest is that for the first time in decades (if not ever), we have open seats for governor, U.S. Senator, and U.S. House, plus every race but one on the entire ballot is contested,” he said. “Lots of choices for the voter.”

The parking lot at Town Hall completely filled during Early Voting. Once inside, voters patiently stood in line on average for 15 to 20 minutes while waiting to cast their ballots.

Paul Whalen, who is co-officer with Linda Passarilla over the Early Voting Town Hall precinct, confirmed Friday the first three days were “crazy — the lines have been out the door every day.

“It is great to see such a huge turnout,” he said. “We sure are happy about that. And our workers are working hard to keep the process flowing as smoothly as possible and put the emphasis on doing it right.”

He said the voters had been very cooperative, and very understanding about their wait time.

“We haven’t had any complaints.”

Most early voters asked Friday said they typically forswore the Election Day process, regardless of what this year’s issues might be.

“I do normally early vote,” said Natalie Knauth, who brought her son, two-year-old Walker, with her. “He has come every time I have voted,” she added. “I am also teaching him it is important to exercise that right.”

When pressed, Knauth did say specifically the governor’s race “brought us out.”

Barbara Mahar also voted in tandem, as she brought her terrier Bella to the polls.

She said it was important to her to “get our vote out early, because we are very strong on our president, and we are very Republican.”

Robin Covey, was also early voting at Town Hall Friday along with her husband, Randy, and said they learned quickly that voting early was preferable to Election Day lines.

Davis advised Farragut residents to be aware of their voting precincts if they decide to skip early voting.

“We had over 700 people on Election Day, Aug. 2, who showed up at Town Hall, but were not able to vote there,” he said, noting that each of the Town’s four wards have their own polling locations. “The only ones who are registered to vote at that location on Election Day live outside the town limits, so they need to be aware of that.”