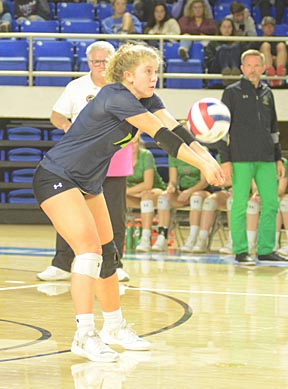 Again finishing as state runner-up, the Lady Irish got off to a slow start and never really recovered Thursday, Oct. 18.

It was the second consecutive year the Lady Panthers (44-7) defeated KCHS in the state championship match.

“We didn’t have our best game,” said Catholic sophomore libero Cassie Kuerschen, who recently committed to play college volleyball at the University of Tennessee. “We played as hard as we possibly could, but they’re just a good team. I think we all worked hard.”

But that wasn’t the case in the title match late last week.

The Lady Irish took a 1-0 lead in the opening set, but Portland quickly responded and wasted little time wresting control of the game at 13-4. Catholic saw their deficit balloon to 24-9 before the Lady Panthers closed things out, tanking advantage of multiple KCHS mistakes.

The Lady Irish committed eight hitting errors and two service miscues in the first set, leaving the door open for the Lady Panthers.

“This is absolutely the best that (Portland) has played against us,” KCHS head coach Brent Carter said. “We played a much cleaner match in the second and third sets.

“We had some errors in the first set, but hat’s off to Portland. I’m not going to take anything away from them by saying we played bad because we didn’t. We kept putting pressure on them and they rose to the occasion. They dug everything and they passed better than we’ve ever seen them pass and serve and receive.”

Catholic, which has been plagued with injuries — losing four starters throughout the season — showed some life in the second set. The Lady Irish opened a 10-7 advantage and led 16-15 before Portland ultimately regained control and took a commanding 2-0 set lead in the match.

The Lady Panthers pulled even and made the score 16-16 on a side-out. Junior outside hitter Katie Crutchfield gave Portland a 17-16 lead with an ace. She would add another service point and the Lady Panthers never trailed again in the second set.

Portland would open a 15-2 lead in the final set, as the Lady Irish simply couldn’t recover.

There wasn’t much disappointment from Carter, who was pleased his squad made it to the final day of the season — and to the grand stage for the fourth consecutive year.

“I can’t say enough about our girls. We lost four starters (earlier) this season,” Carter said. “We got one partially back this week, so for us to make the state final and make a really good run to the state championship match with four starters out, and getting one back just here at the end, truly speaks to the character of these girls and how hard they work.”

Portland outside hitter Marlayna Bullington had 31 kills, 20 digs and two blocks, and was named the Most Valuable player of the title match.