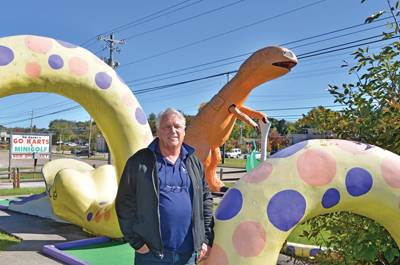 Johnnie Stringfield, only the second owner of Sir Goony’s Golf in Farragut since it opened in 1987, has put the nearly 8-acre amusement park on the market at an asking price of $1.5 million.
The “Goonysaurus” may soon be following in the footsteps of its now-extinct relatives, as Farragut’s Sir Goony’s Go Karts & Mini-Golf is up for sale.

But owner Johnnie Stringfield said it is his hope the property “will always remain Sir Goony’s.

“I have had over 20 fantastic years there, raising my family and enjoying our wonderful community,” he said last week after the announcement to sell had gone public.

“By the grace of God, I am still here,” he said. “Over the busy summers every year, I usually work open to close, seven days a week. It does take its toll.”

His asking price for Sir Goony’s is $1.5 million for the nearly 8-acre property and all assets, which include two 18-hole mini-golf courses, a go-cart track, a paintball field, a seasonal inflatable/splash zone and a full-service concessions kitchen.

However, new owners might elect to purchase only the property for $1 million, without the amusements, or perhaps buy the assets alone then lease the property to continue operating Sir Goony’s, Stringfield said.

Stringfield is only the second owner of the iconic amusement park, as he purchased the Farragut location from its original owners in 1997.

Sir Goony’s, famous for its two-story orange lizard mascot (which Stringfield initially repainted purple and named Barney at his children’s request) and its colorful array of mini-golf characters, has been a local and regional landmark since it opened at 10925 Kingston Pike in 1987.

The Sir Goony’s chain was founded in 1960 by Earl K. “Dutch” Magrath Jr., and his partner, Harry Fields, who built the first two courses in the Chattanooga area before opening dozens of franchises throughout the South and Midwest, reaching at one point as far as California.

It was Magrath’s wife, Barbara, who designed the unique-themed features along the courses, many of which were tied to nursery rhymes. The signature sculpture at all Sir Goony’s was the “Goonysaurus,” a dinosaur with glowing eyes and a large bone used as a cane.

Most Sir Goony’s locations eventually were sold to property developers, and today only a handful remain, including one of the original Sir Goony’s in Chattanooga.

Stringfield, a Sunbright native, bought the property with his wife, Sheila, in April 1997, and the couple has operated it since while raising daughters, Sydney and Shelby. They also have an older son, Andrew.

In an interview that same year with farragutpress’ precursor, Farragut Press Enterprise, Stringfield made noted he had been working in Michigan, but “wanted to return to Tennessee one day and have my own family-oriented business.”

The Stringfields more than succeeded, serving up outdoor fun that grew to include paintball, go-karting, soccer fields and a summertime inflatable/splash zone during the last 21 years.

The Stringfields oversaw an almost complete facelift of the business in 2015, from painting and resurfacing to the addition of a stucco princess alongside the mini golf course’s castle.

At that time, Stringfield summed up his dedication and passion for what became his family’s life work.

“What I like most is the family environment,” he said in 2015. “I think the best thing I like about this (business) is there is nothing better than kids’ laughter.”

His children, now all grown, are not interested in maintaining the business, but there is hope Stringfield may continue Sir Goony’s — he is only listing the property with Keller Williams Realty for six months. He said if it does not sell, he will continue to operate.