A new day at FBC 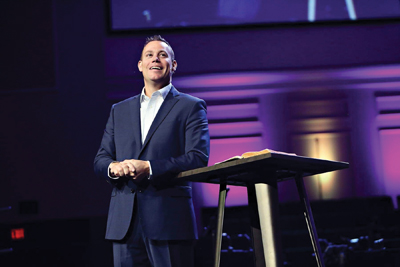 Harrison — joined by his wife, Brigitte; son, Cade; and daughter, Mia, on a visit to FBC — preached before the church’s congregation prior to his selection.

A 10-member Senior Pastor Search team had been working since January on finding a new senior pastor, while Dr. Randy Davis, executive director of Tennessee Baptist Mission Board, has been serving as FBC interim pastor the last 11 months.

“I have grown to really appreciate Pastor John Mark and love him, and I am very excited that the search committee has been led by God to this man,” he added.

Harrison is an Alabama native and a minister’s son who, according to his own testimony, was called to preach as a high school student — but initially leaned more toward playing college football before following the Lord’s directive.

However, after “finally surrendering” his life to the ministry, Harrison began to serve the Lord any way he could, “and God began to open doors,” he said.

He transferred from the University of Alabama to Samford University, from where he graduated in 2006 with a bachelor’s degree in religion. He then received a master of divinity degree in 2010 and a doctorate of ministry in 2012 from Southeastern Baptist Theological Seminary.

His wife, Brigitte, also was called at a young age, specifically to serve as a pastor’s wife, according to the couple’s testimony — a calling confirmed when she met Harrison, she said.

The couple married in 2003, and in addition to Cade and Mia, the couple also was blessed with another son, Dax, who passed away within a day of his 2004 birth.

The couple has served together in all of Harrison pastorates, beginning when he was named student pastor, Pearland Campus, for Second Baptist Church in Houston, then during their time at Biltmore Baptist Church in Asheville, North Carolina, where Harrison also served as East Campus Pastor there until they were called to Apex in 2012.

Under his guidance, Apex Baptist grew from 500 to more than 1,600 members, launched a multi-site campus and recently completed a $4 million renovation to its downtown campus.

There, Harrison was described as having “a strong denominational voice for the state of North Carolina,” and was “recognized for his giftedness in leadership development, discipleship and Bible-centered expository preaching,” according to information provided by the church.

Harrison further shared with the church that “his favorite part of ministry is to see people come to know Christ, learn to walk with Christ, find out what gifts and abilities God has given them and then discover their ministry in the church.

He described his leadership style as “strategic and collaborative, believing a healthy relationship of trust fuels this collaboration and energizes the team to work together.”

Harrison also has been active with the Southern Baptist Convention, where he has served on its executive committee young leaders advisory council, and on the 2017 Committee on Committees while preaching the 2018 North Carolina Baptist Convention sermon.

“John Mark Harrison is one of the SBC’s most promising young leaders,” said Dr. J.D. Greear, president of Southern Baptist Convention. “Naturally speaking, he has it all — charisma, good leadership instincts, great people skills and is a phenomenal preacher.

Even more, the hand of God is upon him. In the years I have known him, I have seen him walk with integrity, humility and a deep dependence of God. He is loyal and dependable, and I am excited to see how God uses him in this next chapter.”