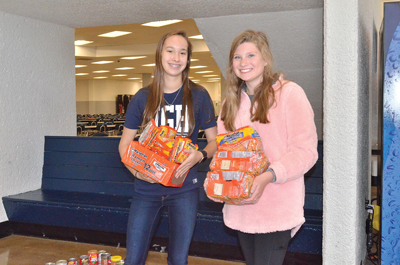 That reaction came from Jerri Shelley, a 26-year Love Kitchen volunteer who currently serves on TLK Board of Directors, about Farragut SGA’s latest collection effort.

With Farragut SGA the biggest annual food contributor to TLK dating back several years, its 2018-19 effort set a school record by collecting roughly 22,000 cans and other non-perishables, which include $4,000 in donations adding up to the equivalent of 8,000 cans.

Of the 80 Farragut SGA students who helped in the effort, about 50 made the delivery Friday afternoon, Oct. 26, along with Elizabeth Blankenship, FHS faculty sponsor; Alex Shaffer, social studies teacher; and Richard Fisher, parent volunteer.

“So this year I really wanted to break it again,” said Fisher, SGA president in her senior year who has been part of the drive each of her four years at FHS.

“I’m so proud of SGA, they were just so really, really hard working,” she added.

“These four ladies right here — Rebecca, Alisha, Jessie and Audrey — they coordinated this whole thing and got everybody in (SGA) to jump on board and to make it happen,” said Blankenship, also commending FHS teachers “who allowed their students to take time out of class to raise cans.

“There’s a lot of faculty who really support our Love Kitchen drive,” she added.

While showing smartphone photos of the high stacks of cans and non-perishables from the 2017 SGA effort, Shelley said, “This one beat it.”