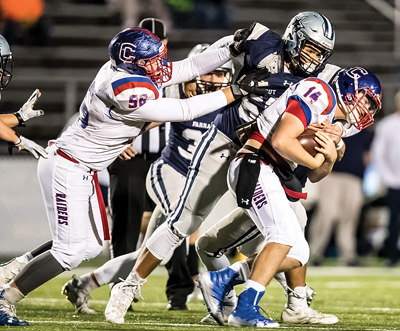 Billy Seal, Farragut senior defensive lineman (blue jersey), overcomes some Cleveland offensive line holding to bring down a Blue Raider during this Class 1-6A first-round playoff game at FHS’s Bill Clabo Field Friday night, Nov. 2. The Admirals won easily 49-24.
Farragut High School football head coach Eddie Courtney wanted to make sure his team got off to a fast start in the first round of the Class 6A playoffs.

The veteran coach couldn’t have scripted a better beginning, as the No. 1-seeded Ads scored 21 points in the first quarter and cruised to a 49-24 victory over Cleveland Friday night, Nov. 2, at Bill Clabo Field.

“We talked all week long about how we had to come out fast to beat this bunch because they’re well coached and they’ve got some athletes,” Courtney said after his squad improved to 10-1 with the lopsided victory over the No. 4-seeded Blue Raiders. “We didn’t want to give them anything to feel good or be happy about.”

Next up is a second-round showdown versus Ooltewah (9-2) at Bill Clabo Field this Friday night, Nov. 9. The Owls, surviving a late Hardin Valley Academy rally (see story below), didn’t survive a 2016 Farragut quarterfinal playoff rally, blowing a 42-14 third quarter lead and losing 56-49 in two overtimes.

About using that as motivation, “absolutely; they went on and won the state championship, and we felt that should have been ours,” said Owls head coach Scott Chandler, a freshman coach on the 2016 staff, after his team held off HVA last Friday at OHS 35-28.

Cleveland forced FHS to punt on its first possession, but a Blue Raiders muff gave Farragut possession at the CHS 12.

The Admirals later would score when Gavin Wilkinson connected with Isaiah Gibbs on a 7-yard scoring strike. Daniel Bethel’s extra point gave Farragut a 7-0 lead with 9 minutes, 27 seconds remaining in the first quarter.

Wilkinson extended FHS’s advantage to 14-0 a short time later when he fired a 33-yard touchdown pass to Jaden Gibbs.

Running back Kyle Carter joined the scoring parade with 4:06 left in the opening frame, when his 4-yard plunge made it 21-0.

“I’ll be honest. I’m not very surprised about it,” said Wilkinson, who completed just 4-of-5 pass attempts for 114 yards but had three touchdowns. “I know our team and when we’re feeling it — we’re feeling it.

After the Blue Raiders scored on the final play of the inaugural frame, the Admirals scored 21 unanswered points in the second quarter.

Wilkinson threw his third TD pass when he hooked up with Tanner Corum from 62 yards out.

Jake Evans, who relieved Wilkinson, fired a 16-yard touchdown toss to Carter, who would later make it 42-7 with a short touchdown scamper.

Farragut also scored on its first possession after halftime when Gabe Hensley found the end zone from 23 yards out.

Defensively, Ads sophomore defensive end Eli Purcell led in solo tackles with five and in total tackles with seven, which included three for minus yardage.

Matt White, FHS sophomore defensive back, had two minus-yardage stops, while Alec Keathley, Neyland Harmon, Jake Parsons and Joey Dietz each had one.

As a defensive back, Evans grabbed an interception and returned it 23 yards.

(Alan Sloan contributed to this story)