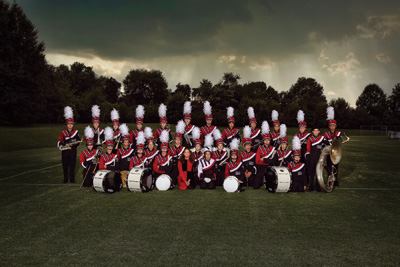 Concord Christian School Marching Band assembled earlier this season at a middle school home football game, where they dressed out in full uniforms for the first time in the band’s four-year history. This season has been big in many ways, most notably the group’s recent first-place sweep at Rhea County Marching Invitational Regional Competition Saturday, Oct. 27.
Concord Christian School Marching Band didn’t miss a beat when school administrators decided to suspend the school’s varsity football team for this season.

“We never thought about disbanding,” band director Matthew Stephens said. “We don’t have to have a football team to have our marching band.”

Instead, the 31-member group had a very full fall calendar, crowned by the band’s first-place sweep at the Rhea County Marching Invitational Regional Competition Saturday, Oct. 27.

CCS — which also enjoyed its first season fully dressed in uniform — bested teams from Kentucky, Georgia and other parts of East Tennessee, winning first place in percussion and color guard in addition to first place overall.

The Rhea County Invitational was the final competition of a season that saw the group successfully participate in three competitions, as well as one band festival.

The awards are even sweeter for a group that is only in its fourth year overall, and only in its third year of competitive marching. Altogether, CCS Marching Band has acquired 22 trophies and/or plaques since 2015, Stephens said.

“We have done really well and scored really high for a young band,” he added.

The marching band also filled its schedule this season with performances for the middle school football games, represented Grace Christian Academy during its home game with Webb School of Knoxville and will perform in this year’s annual downtown Knoxville Christmas Parade Friday, Dec. 7.

“It will be the first time we have ever been in the parade, which is televised,” Stephens said. “It is really big for us and it’s pretty cool.”

Being dressed in full uniforms for the first time also has been a huge highlight for this year’s program, Stephens added, noting the $20,000 uniforms price tag has been completely funded through a fundraising campaign plus generous sponsors and donors.

It has been a silver lining for a program, which could have gone the way of the football team — though the CCS Lions football program is scheduled to field a varsity team next season.

“We looked at different plans and realized we could still have a full season this year,” Stephens said. “You could sit and pout about it or you could get at it and find something to do.

He said the band’s participating at middle school games was a big boost for the players.

“Band kids were cheering for the (players) and it really pumped up the players and kids,” Stephens said. “They told us it made it like a varsity game.

“Our students have truly ‘bought in’ to the program. ... This group has really persevered over huge obstacles, of no football team and no uniforms,” he added. “I don’t know if you will ever find a more energetic group on campus.

“I learn a lot from them, too. It is my honor being their teacher.”