Hardin Valley Middle off to a winning start 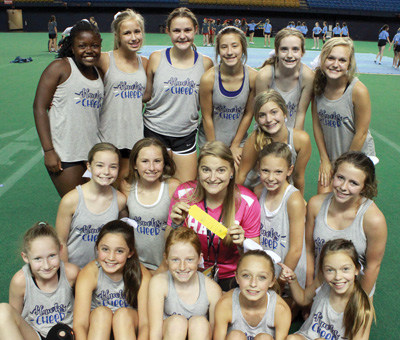 The school first opened its doors in August, but students already are winning.

“We’ve got a pile of awards,” HVMS principal Dr. Cody Smith said. “Our cross country team has done really well. They’ve gotten eight plaques (in the office) for various first- and second-place finishes that they’ve had throughout the fall.”

The cheerleading team was the first in the school to win awards, taking part in a camp held last summer by Universal Cheerleaders Association at East Tennessee State University in Johnson City.

These girls earned a superior rating and a ribbon for their practice routine at the rally camp, HVMS cheer coach Heather Auxier said. “Now we just need a trophy case.”

“It’s a great start to the whole process (of opening a new school),” Smith said.

The tennis team also has performed well while heading into the playoffs.

“The gym was packed,” he said. “That was great to see that.”

Academically, Smith said the school’s Student Government Association “is really coming together — we’ve got that up and running,” while the school is collaborating with Hardin Valley Academy on its theater class.

“We’ve partnered next door with Hardin Valley Academy,” Smith said, adding HVA is casting some of his students in its plays.

He also said HVMS’s Parent-Teacher Organization has been “phenomenal” in its support of the school. “... We have really come together pretty quickly, having a good, common focus — taking care of the students and raising the achievement bar.”