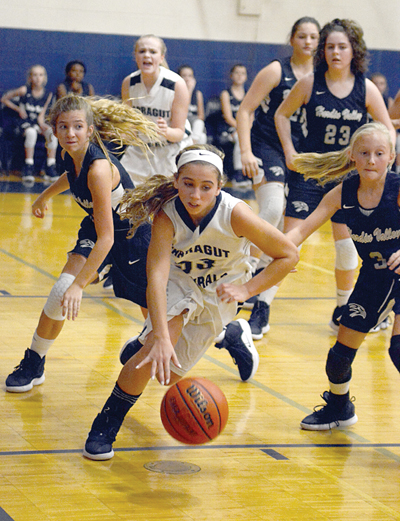 The Lady Ads got off to a fast start thanks to eighth-grade forward Aubrey Stackhouse.

Aubrey, who played on Farragut’s last two teams that won the James A. Ivey Jr. Memorial Middle School Basketball Tournament, posted a double-double as she scored 14 points and grabbed 13 rebounds.

Hardin Valley has dropped three consecutive games since winning its first-ever game, which was at Holston, Monday, Oct. 29. .

“We played better in the second half,” HVMS head coach Cara Cahak said. “My kids didn’t quit. They don’t quit. I’ve got a bunch of fighters.”

Jenna Thorley scored two points against the Lady Hawks but she did run Farragut’s offense while she was in the game.